I have only been to Romania once, to Suceava and to Cluj-Napoca. I liked them a lot, so I was curious, what else I could find in this country. Timisoara is the second largest city of Romania and the capital of the historical region Banat. The name of the city is orginally Hungarian, Temesvár, which means city at the Temes river. This name they also took as the German name, Temeschwar. Until 1919 the Banat was part of the Austrian-Hungarian monarchy.  For a long time I wanted to visit this city. As some friends of mine decided to go there by car, I took the chance to join them.

Timisoara is already at first glance a pretty city. Old facades, renovated, huge squares and smiling people. Timisoara applied for being European cultural capital in 2020, therefore, almost every street in the city centre is under construction.

When I was there, it were some of the hottest days of the year (so far). At 32 grades the beautiful women were mostly dressed in light and elegant summer dresses, some not wearing a bra underneath. Puh, it got even hotter then! Somehow I had the feeling to be in southern Italy rather than in Romania.

It was senseless to try to move in this heat, so we sat mostly by the river, not far from the centre, drank coffee, beer and fruit shakes on a coffee-house-ship. Sitting in the shade by the river we were drawing, reading and lying around. La dolce vita!

The evenings were reserved for the sight-seeing. The highest orthodox church of Romania at the end of Victory Square is worth a visit, as well as the art museum in an old baroque palace. Unfortunately, exactly in the time we have been there, there were some holidays, so most of the museums were closed. The Banat-museum in the castle in the city centre is momentarily under re-construction. 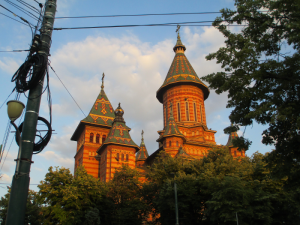 The surroundings: When you ever will go there by car, you can visit the nearby city of Lugoj/Lugos, where famous Dracula actor Bela Lugosi was from, or Orsova to the South, where you can find the highest stone sculpture of Europe. When you go for a hike in the mountains, just watch out for sheepdogs, which can be very dangerous, they don’t see many people there.

All in all, I recommend to visit the very west of Romania, but maybe in a year or so, when the constructions on the streets will be done.