Music was my first love – and it still is. First and foremost. Music is a certain form of language, it transports ideas and feelings. As I have spent a big amount of my life dealing with languages, linguistics, language teaching and language acquisition (I can communicate more or less in twelve different languages) I guess I can sometimes be a pain in the ass of my vis-à-vis, if he or she is not so much into that topic.

It is always nice to speak to people in their mother-tongue, not least to show one’s respect towards another culture. Language also opens up new views and deeper insights. Recently, I stumbled upon a website with a lot of quotations on language. Some of them I found interesting, some funny. I want to share them with you, not without adding my two cents to them. 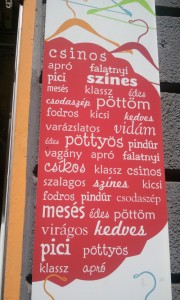 Learn a new language and get a new soul. ~Czech Proverb

Very true! Learning a language is never just about the language, doing so also implies culture, history, a society and ways of living. The following quotation would also contribute to this notion: A different language is a different vision of life. ~Federico Fellini

Funny! The English hegemony in the world makes it possible to get around without having learned a foreign language. But sometimes it is quite hard to make yourself understood properly with English only. Contrary to American popular belief, not every human being on this planet is able to communicate in English.

When a German dives into a sentence, you won’t see him again until he emerges at the other end with the verb between his teeth. ~Mark Twain

If I did not mention it yet, German is my mother-tongue. What Mark Twain said is, actually, a funny side blow to the German syntax. Whoever undertook the enterprise to learn German, will know what Twain is talking about.

A word is not a crystal, transparent and unchanged, it is the skin of a living thought and may vary greatly in color and content according to the circumstances and the time in which it is used. ~Oliver Wendell Holmes

This is maybe my favourite quotation about language. Language is a system in a permanent state of change. While dictionaries serve as a framework for a codified language, it is still the people who transform thoughts into words and change their meanings.

1 thought on “Some Thoughts on Language”