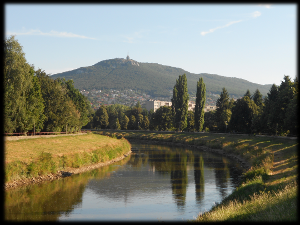 So, finally this is working. I already wrote this article down once and then my computer just crushed. Quite annoying. Just to keep things clear: Savetier is not dead yet. Neither am I lost somewhere in Eastern Europe. That is what happened:

After I spent some more days in Warszaw my journey took me further to Western Slovakia, via Bratislava to the city of Nitra. It is about an hour away from the capital and one of the larger cities of Slovakia.

At the first glance Nitra is maybe not Slovakia’s prettiest city. Surrounded by socialist blocks, it doesn’t seem to be very special. But when you see the centre, you would maybe change your opinion. A pedestrian zone along Stefánikova street leads to the Nitra castle on a small hill. A nice river, also called Nitra, contributes to a more positive image.

The whole region is interesting from the historical point of view. On the borderline between Slovakians and Hungarians the region is still a place of ethnic conflict. Ethnic Hungarians live all over the region, in the cities of Komárno and Štúrovo at the Danube river (which marks the border between Hungary and Slovakia), Hungarians are even the majority.

That Hungarians are settling there has historical reasons. I was surprised, how little people I met there knew about the Treaty of Trianon, after which the territory of Hungary has been reduced by two thirds after World War I.

After the compromise between Austria and Hungary in 1867, when the Austrian monarchy has been transformed to the Austro-Hungarian monarchy (Double Monarchy), the Hungarian part saw itself already as a kind of nation-state. The shape of Hungary in the time between 1867 and 1918 is known as Greater Hungary (Nagy Magyország) and stayed a collective Hungarian myth till today. Therefore, populists like Viktor Orbán, prime minister of Hungary, easily can play with national sentiments referring to the “unjustified” Treaty of Trianon (compare Germany and the Treaty of Versailles), causing controversies with Slovakia.

Interestingly, this does not seem to be such a huge problem for the common people living in the Southern Slovakian region. As far as I could see people are treating each other with respect, are living peacefully side by side. I really hope this impression is correct.

My next station will be L’viv in Western Ukraine.