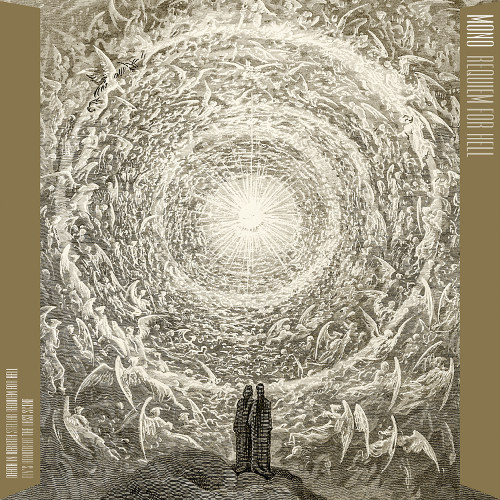 So, Mono, the post rock giants from Japan, are back with their ninth album, due any day now. Requiem for Hell is comprised of five tracks. Produced again by the legendary Steve Albini (Shellac, Big Black) which can only mean good things.

Two songs are available to pre-listen, ‘Ely’s Heartbeat‘ and ‘Requiem for Hell‘. The latter was already performed on the band’s The Last Dawn/Rays of Darkness tour in 2015 – the sitting down, immersed in the musical arrangements and (for the band in question) rather subdued tour of 2015. In contrast to some dramatic, cathartic – revelatory even – live experiences of the earlier years.

Indeed, the characteristic post-rock pattern of a slow building wall of guitars up to and past a noise climax, and then releasing only to regain the audio strength anew, is missing on Requiem for Hell.
The album instead offers a less tense, yet profound and highly cinematic instrumental atmosphere of melancholy focusing more on an intricate interplay of strings and chimes then solely on the raw power of the guitars.

The opening ‘Death in Rebirth’ begins rather upbeat and spirals slowly into intricate noise and finishes with delightful guitar feedback in the vein of Sonic Youth. ‘Stellar’ is a beautiful and gentle elegy. Third and longest piece, ‘Requiem for Hell’, the album’s namesake, starts minimalistically post-rockish but surprisingly turns out to be an almost proper indie instrumental, before the hell breaks loose. In the context of the stages of grieving, ‘Requiem for Hell’ is the sound-equivalent of rage. The next song, ‘Ely’s Heartbeat’, is acceptance. The prettiest sounding of the five, reminding one there is beauty in sadness and tiny rays of light can be found even in the dreariest wastelands. Finally, ‘The Last Scene’ is even softer and sonically lusher, perhaps to prove there is a new beginning after every end.

Surely it all needs to be witnessed live on one of the occasions on Mono‘s densely packed European tour schedule but it can already be said that Requiem for Hell is another emotion provoking masterpiece which any post-rock fan will appreciate.