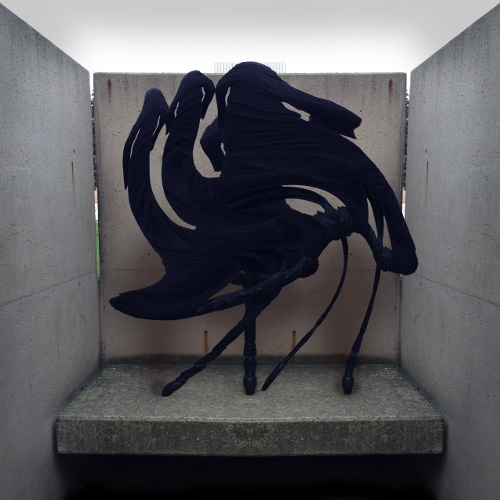 One of the newer bands of the last years which I really, really appreciate a lot, is Ascetic:. The post-wave trio – originally from Australia – moved to Berlin three years ago. Their début Self Initiation (2013) was a revelation and became one of the most listened albums in my collection. And finally, after a long period of waiting, Ascetic: return for a new release, consisting of nine fresh tracks.

Everything is Becoming was a big surprise in many ways. From the first listen it is obvious that it sounds much harsher and more experimental than its predecessor. August Skipper’s vocals often go away from the monotonous way of singing, as we know it from Self Initiation (e.g. ‘I Burn‘), he also screams sometimes. The bass is more salient this time, the effect pedals are not spared.

Already in the opening song ‘Utterings’ we can hear that there is a heavy influence by early Swans and other no wave artists. When I played this song aloud some books fell off the shelf next to the boxes. Also the next songs ‘Exegenis’ and ‘FTO’ go more in the direction of no wave, where the former is an excellent piece of experimental music.

For those who prefer the “original” Ascetic: sound, the latter six songs are – although also harsher in sound – more in the vein of their début. Here I want to bring the last two songs ‘Atheism’ and ‘History’ to your attention, my favourites on Everything is Becoming.

But why the change in sound? As every album has its own history, I was curious and asked drummer Andrew Jigalin, who gave me an elaborate and revealing statement:

“Everything is Becoming was recorded in Berlin and most of the songs were written here also and the move here and integrating had a huge influence on how the record took shape and sounds. Berlin and Europe sounds different to Australia and the weather is different and the look and everything else too. This all drips into the fabric of the record. Also, we are trying to explore different song structures and warping the traditional song format more.”

I am sure that fans of Ascetic: would also love their second album, perhaps after a short phase of getting accustomed to their more experimental style. Everything is Becoming is less accessible than Self Initiation, but more challenging for your ears – and I mean this in a good way. It also took me a while but now I couldn’t live without it.