Just finished watching the recently released second season of Stranger Things on Netflix. As long as the impressions and images are still fresh in my mind I am trying to put my thoughts down here. In case you haven’t watched the series yet, I warn you to do so before reading further, I am trying not to spoiler too much but one or the other thing might slip.

After I read last year that there would be a series which is an homage to the early 80s, I could, of course, not resist watching it. That Stranger Things had a supernatural plot made me skeptic, though. Too much crap was produced under that label, with some amazing exceptions, but few.

But Stranger Things is so much more than trashy entertainment. In the following are some reasons why I started to love that series:

The iconic title sequence kicks the watcher in the right mood: a synthwave melody that goes under the skin to actually not much more than the neon letters of the series’ title. If you grew up in the 80s and early 90s this will definitely awake nostalgic feelings. It reminded me of the 80s’ intro of Doctor Who. In case you are interested in typography, Time magazine has featured a whole article just about the title sequence of Stranger Things.

The soundtrack is, predictably, splendid. Many songs by bands we all adore are played throughout the series, like Devo‘s ‘Whip It‘, Fad Gadget‘s ‘Back to Nature‘ or Duran Duran‘s ‘Girls on Film‘. Will’s brother Jonathan often talks about his taste in music, mentioning Bowie, Joy Division, and The Smiths among others, making him one of the most likeable characters of the series. 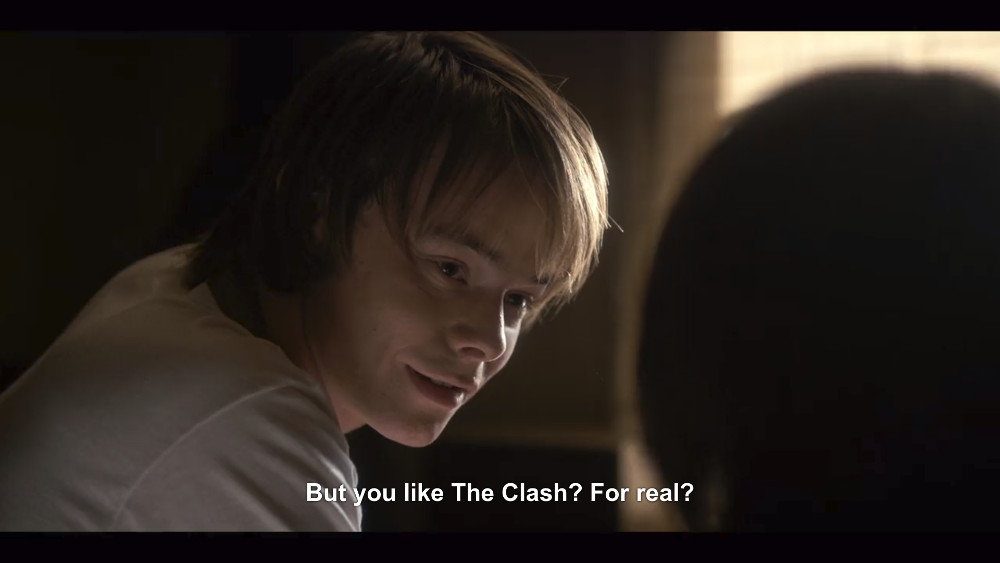 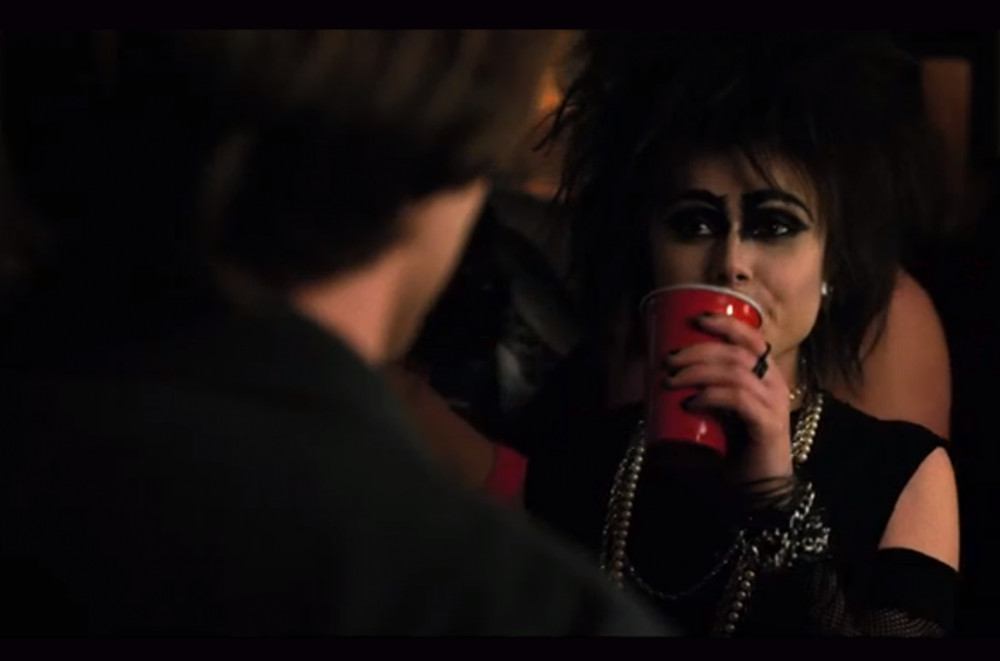 The hairstyles of some of the protagonists look fantastic! Not all of them of course, I think Will’s looks especially stupid, but look at Nancy, Steve, Mikey – and the freaks. The moment when Steve explains Dustin the secret of making his hair hold, is priceless. 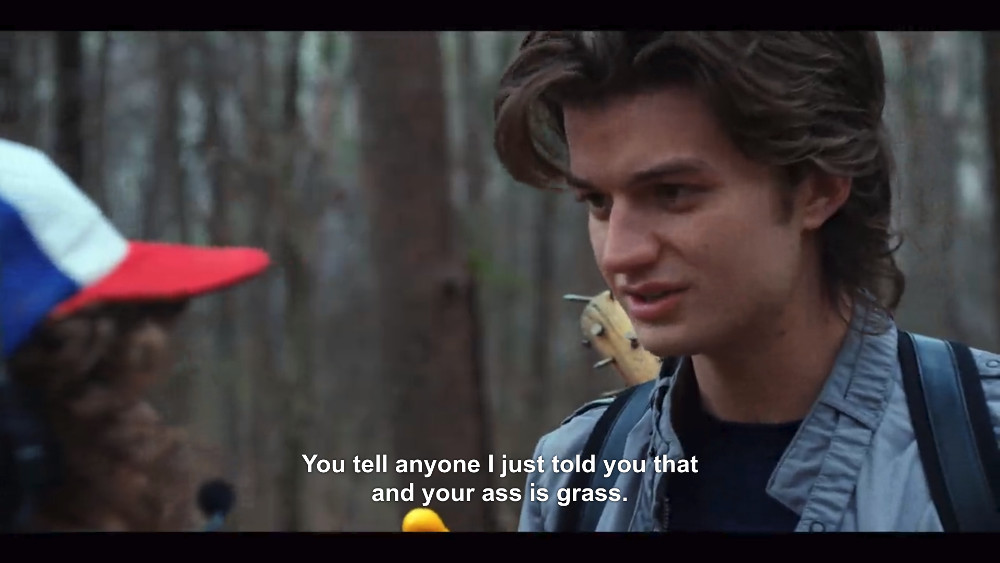 A big surprise for many was Eleven’s metamorphosis. I was so hoping that the freaks would give her at least some styling tips, and voilá, the new Eleven looks like The Damned‘s Dave Vanian – bitchin’! 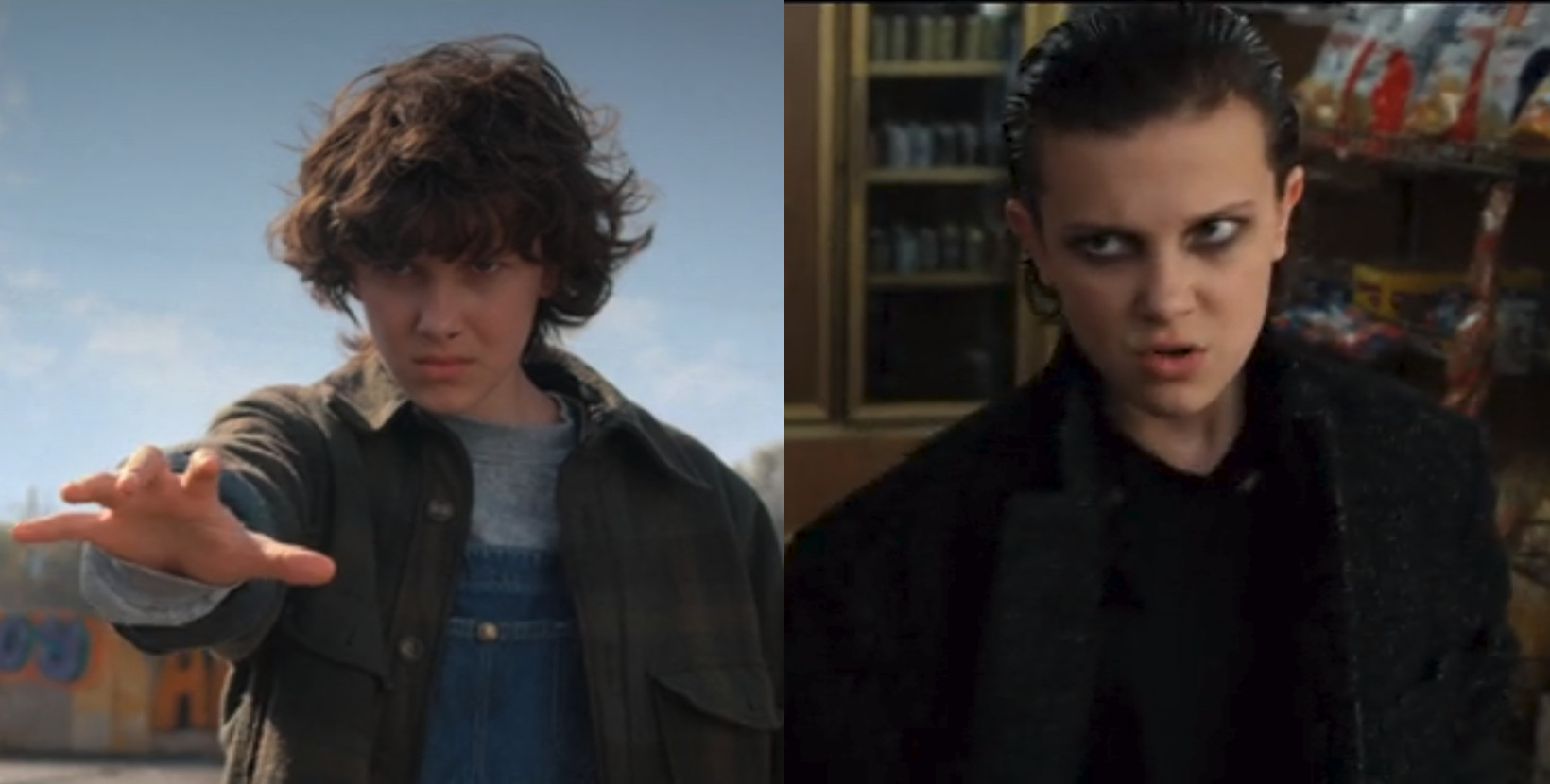 What would be an 80s series without a bizarre love triangle? Nancy between Steve and Jonathan: “You are young, attractive, you’ve got chemistry, history, plus the real shit, shared trauma.” Let’s see where this will lead to. I like both, Jonathan and Steve, especially in the second season. Steve seems to be somewhat cool with the situation. But is he really? 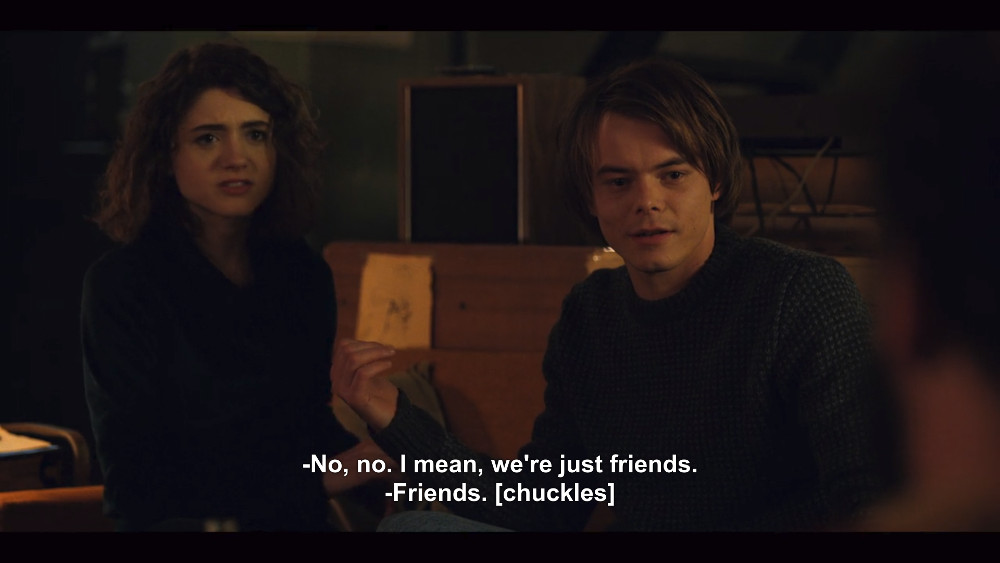 All characters in Stranger Things are kind of well-defined, but my favourites are Dustin and Nancy. Dustin, a specimen of his own, always stays cool, even when facing real danger. And for any situation he has a slur or a joke or something nerdy to say. 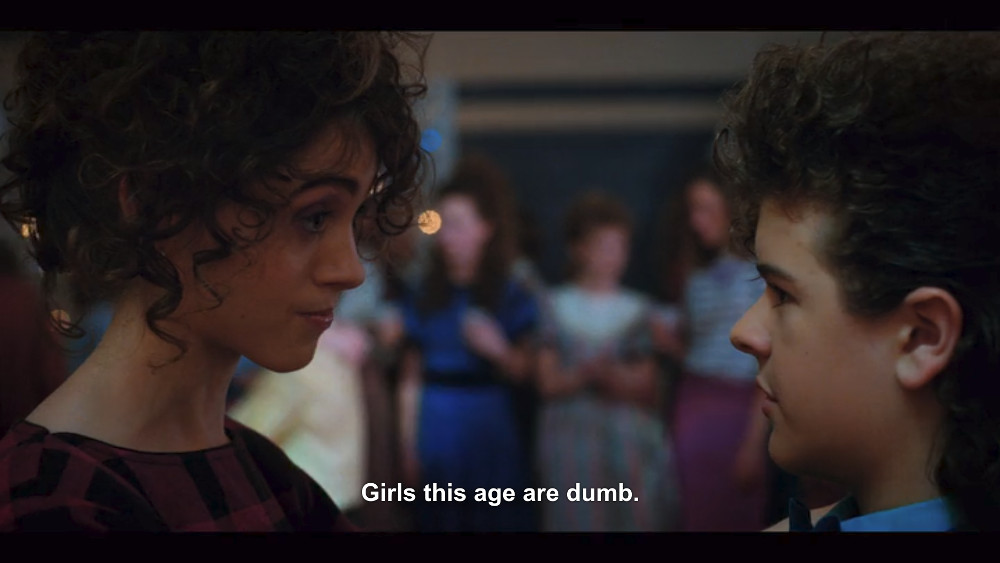 And Nancy? She is simply adorable! Gorgeous, cool, intelligent and benign. Who wouldn’t fall for her? 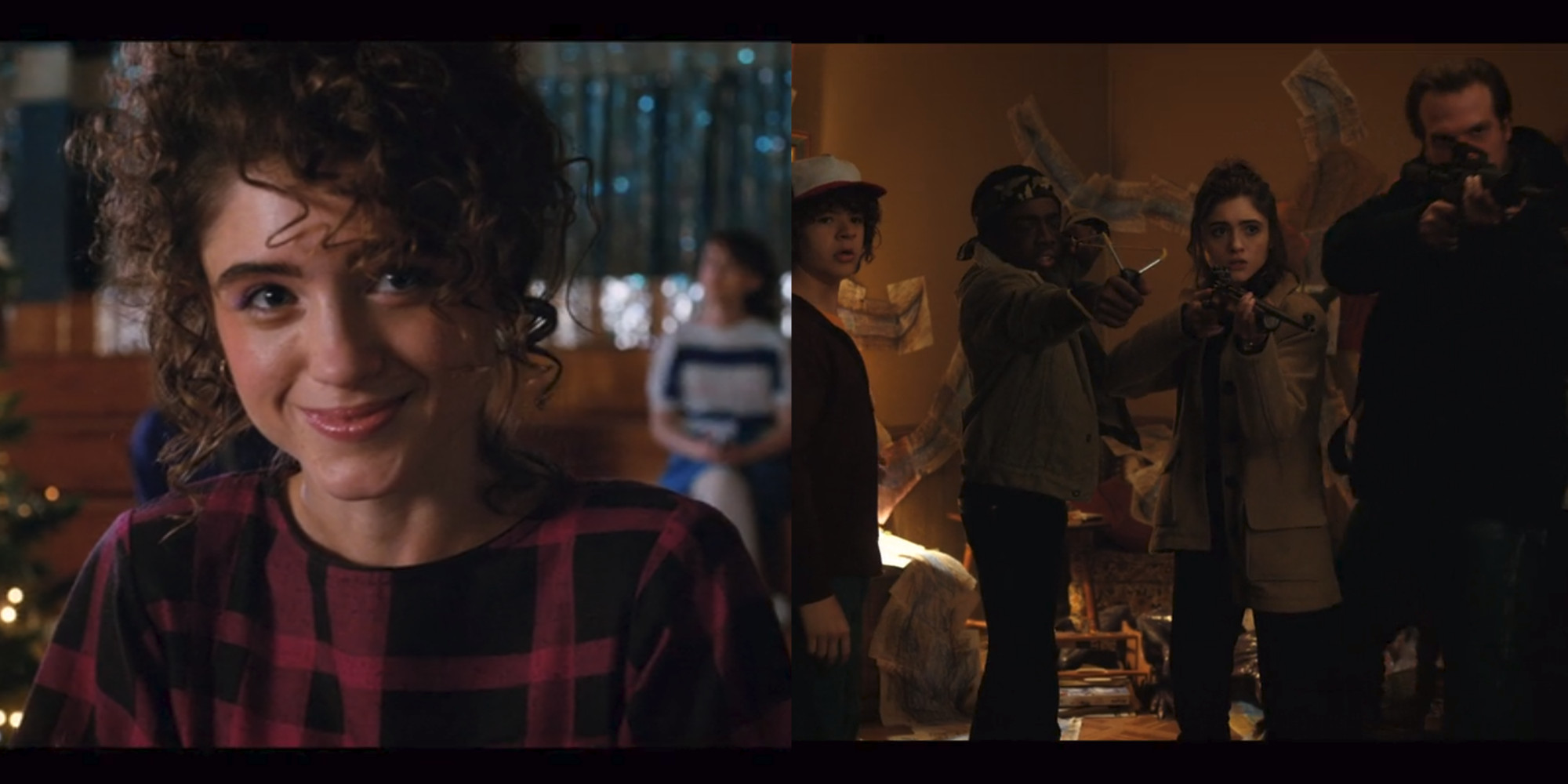 There are many more popular culture references in Stranger Things. The group of outcast nerdy kids on adventure strongly reminisces of Stephen King’s The Body (1982, later filmed as Stand by me, 1986). The adolescents Nancy, Jonathan, Steve, and Max’ vicious step brother resemble the Brat Pack (need to re-watch The Breakfast Club soon). Max’s step-brother seems to be too blunt a character for this series, although we get a glance on his inner struggle that makes me think of how he might evolve. The supernatural plot is obviously influenced by Ridley Scott’s Alien.

Above all, the jokes are hilarious. 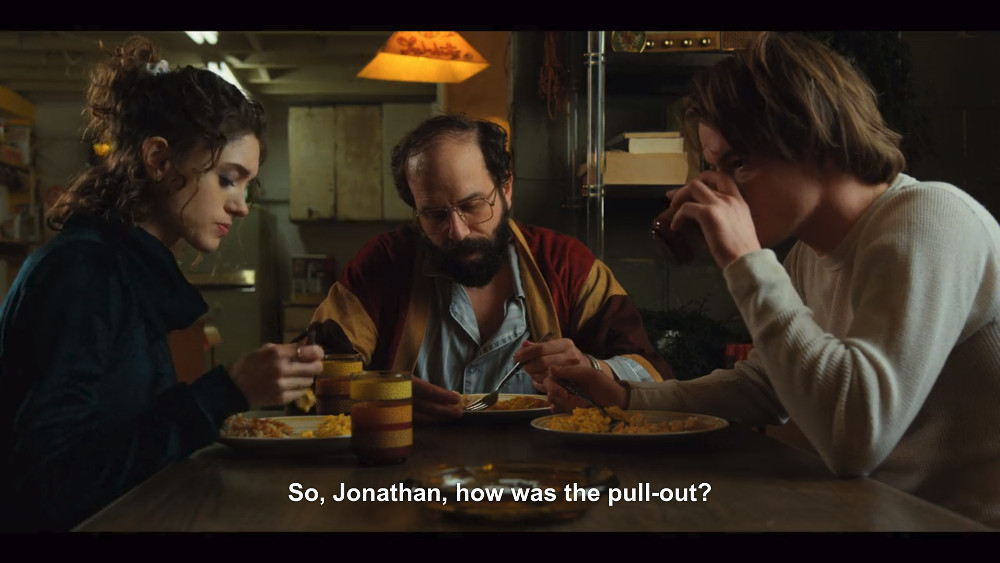 All in all Stranger Things is a great series, even more so for lovers of the 80s. Although the series seems to have come to an end after season two, I was happily surprised when I read today that there will be a third one, and maybe more. A time travel of a different kind.