The term ‘subculture’ is in sociology, anthropology and cultural studies defined as a group of people within a culture, which differentiates them from the larger culture to which they belong (Samovar 1998: 50). In other definitions the term ‘co-culture’ is preferred, “because it calls attention to the idea of dual membership” (Martin 2010: 9); “Co-cultures may share many of the characteristics of the dominant culture, but their members also exhibit distinct and unique patterns of communication” (Martin 2010: 9).

‘Dark Culture‘ is an umbrella term for several music-oriented subcultures that have merged since the 80s to one big conglomerate. However, in English-speaking countries the term is rarely used. Maybe a more popular term for it is the German expression ‘Schwarze Szene‘ (“black scene”), also sometimes referred to as “the scene without a name“ (Matzer 2000: 15). The sporadic use in English might give the English Wikipedia-page on Dark Culture, which is very short and hardly contains information, while the German entry on Schwarze Szene is well-structured, and gives a deeper insight on the topic. Under the notion that Dark Culture describes the same culture as Schwarze Szene (and furthermore cultura oscura in Spain, cultura dark in Brazil, darkerji in Souther Slavic countries, …), subsequently the English term is used.

Originally the Dark Culture was formed in the late 1980s/early 1990s by the darkwave-movement and consisted mainly of former devotees to punk, post-punk, new wave, gothic, new romance and (post-)industrial. At that time these were often labelled as ‘wavers’. The connotation with dark and black comes from the fact that supporters of the alternative culture preferred to wear black clothes.

The Dark Culture is therefore not homogeneous, but a socio-cultural milieu, where people of similar interests and preferences reside. The main interests are music, fashion, art, and philosophy – often topics are discussed, which are tabooed among the mainstream culture. 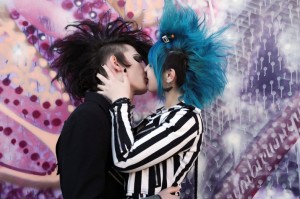 Still, the gothic appearance is the most conspicuous and known. Participants of the the Dark Culture are perceived by outsiders often negatively. The colour black as their main feature of identification raises suspicion and awakes fear. The intentional play with conventions and norms, as well as their obvious appearance and behaviour may lead to confusion in the mainstream culture: “[E]ven those with no idea what goth is or who have never in their lives listened to goth music will notice the distinctive look on a passerby” (Issitt 2011: 31). A participant of the Dark Culture’s expression in fashion is “making a clear statement to those outside that they absolutely DO NOT belong to the mainstream” (Issitt 2011: 35).

More than a subculture or a movement the Dark Culture, especially goth, is an aesthetic:

There is an overarching aesthetic at play—exploring the beauty and allure of darker themes. From a simple monochrome palette to elaborate costumes inspired by horror and science fiction, goth fashion is a playground where individuals can explore alternate personas and hidden fantasies, and test the boundaries of the mainstream concept of beauty. (Issitt 2011: 31)

1 thought on “Dressed in Black · On Dark Culture”