One thing I really like about minimal wave music is that it is de-centralized. That means, there are many musicians out there, singing in their mother tongue, which is not always English. This gives us also access to more exotic language regions.

After a minimal wave concert in Budapest around Halloween 2012, I met with the musician, we had a little talk and stayed in touch afterwards. His name is Ádám Bérces. The following will be a short portrait of this promising minimal wave instrumentalist, his first album and his sound. 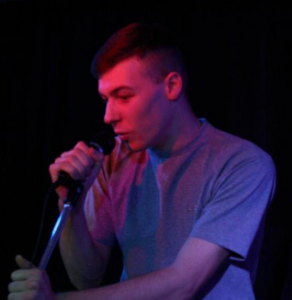 Ádám Bérces from Hungary, born in 1988, dedicated a big part of his young live to music-making, as his biography shows: He has a classical education in trumpet, horn and trombone. As a teenager he played in several metal bands, before he discovered underground music. Today Ádám Bérces has three projects: Kraschau (martial industrial), Morskog (ambient) and under his own name he is making minimal wave music.

Soon Ádám’s first full-length album Posztapokaliptikus Almanach will be released via Vocoder Tapes. Eight tracks are waiting for the minimal wave fan’s ears. At the first listen it becomes obvious, why Ádám named his style “cold minimal electronics”. It is freezingly cold, the use of the exceptional Hungarian language alienizes the sound even more for non-native speakers. Two songs I want to mention especially due to their minimal perfection: ‘Be vagyunk programozva’ (Engl.: We are programmed) and ‘Üres Ház’ (Engl.: Empty house). You can listen to these songs (amongst others) on his homepage. If you are into minimal wave this record shouldn’t be missing in your collection.

For those of you, who are interested in the technical aspects of Ádám Bérces’ music, I will give the word to the mastermind himself: “My favourites are the cheap FM synths made by Yamaha in the 80’s, I also collect them, in this project I use an FB-01 and the legendary SHS-10. Furthermore I use the KORG Legacy VA synths, sometimes my old Commodore +4, which was my first computer and also the first tool on which I have composed music as a kid. The drum sounds are from a Roland TR-606″.