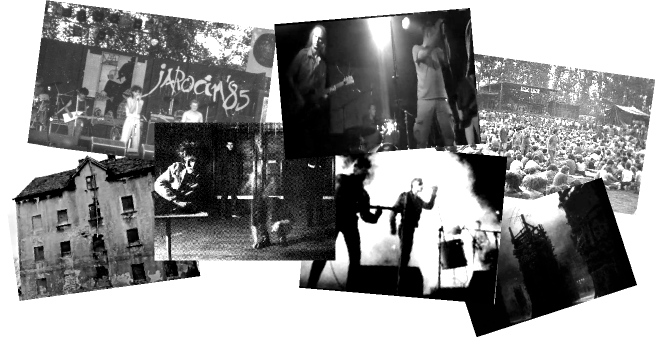 The term ‘coldwave’ recently re-appeared as a label for post-punk influenced music, which embraces a dark, gothic-like aesthetic. But what can be found behind this ambiguous term? The article on hand will outline the history of coldwave in general and then the development of a coldwave movement in Poland.

A Short History of Coldwave

Once again Siouxsie and the Banshees  appear to be the first band  labelled as making coldwave music in 1977 by British journalist Vivien Goldman. Musical journalist Simon Reynolds later confirmed this label for Siouxsie Sioux’ début-album The Scream (1978). Although the album might not resemble the typical coldwave style, which evolved later – in the beginning of the 1980s – they were, together with Joy Division, The Cure and artists of similar musical style, a crucial influence for coldwave bands.

Both, coldwave as a sub-genre of post-punk (characterized by a cold, yet passionate sound), and coldwave as a term, interestingly, had their biggest impact on the French new wave music scene. Bands like Norma Loy, Little Nemo, Asylum Party, Clair Obscure and Trisomie 21 adopted the name ‘coldwave’ for themselves and contributed to forming a unique musical style, now known as French coldwave.

But coldwave was not solely a French phenomenon. In the early 80s, it began to flourish in another European country as well – Poland. There ‘coldwave’ transformed to ‘zimna fala’ (Polish words for ‘cold wave’). The Polish interpretation of coldwave is considerably different from its Western counter-part and it became one of the flag-ships of Polish dark culture throughout the decade. Some notable bands considered coldwave are: Siekiera, Variété, Made in Poland, 1984, Aurora, Madame, One Million Bulgarians, Kosmetyki Mrs. Pinki, Bruno Wątpliwy, Ivo Partizan and Enklawa Ełk.

Between 1984 and the early 1990s, Polish coldwave was the mainspring of the annually organized Festiwal Muzyków Rockowych in the city of Jarocin, which helped a lot of Polish coldwave bands gain recognition/popularity. The rebellious character of the music against the regime came to a halt after the fall of the People’s Republic of Poland. Without the rebellious component the festival commercialized increasingly and, as a result of this, met its end in 1994.
Perhaps the most legendary was Jarocin ’85, about which a documentary was made and you can watch it here on YouTube:

From the 90s on the coldwave spirit in Poland has been decreasing more and more. Yet, some of the pioneers have re-appeared, some have never vanished and also some younger bands have been adopting the style of their idols.

Let us now take a closer look on the music labelled Polish coldwave. The main anthem of zimna fala is, definitely, Siekiera‘s ‘Nowa Alexandria’, though my favourite is still 1984‘s ‘Biała Chorogięwka’, both songs previously mentioned in my Top 10 of East-Central European Post-Punk/New Wave.

Made in Poland is a coldwave band from Cracow, which existed from 1984 to 1987, but re-united in 2006. They have kept the Polish coldwave spirit alive until today. The following song is the title track of the album Future Time (2009):

Many people probably know Robert Gawliński, with his unique voice, as the frontman of contemporary Polish pop/rock band Wilki. What is maybe not so well known is that in the 80s young Gawliński formed a coldwave band called Madame. Whatever you may think of Wilki, the music of Madame excellently reflects the coldwave mood of the mid-80s in Poland. You can listen to one of Madame‘s better known songs, ‘Gdyby nie szerszenie’ (‘If it were not hornets’) here:

Another legend of the zimna fala is a band with the interesting name One Million Bulgarians. The band from Rzeszów made a series of excellent songs and also took part at the Jarocin Festival in 1986. The following song, ‘Czerwone krzaki’ can be translated as ‘Red Bushes’.

I highly recommend to listen to one of the newer coldwave bands from Poland, called Psychoformalina. They are from my favourite Polish city, Wrocław, and have recorded two albums by now: Psychoformalina (2008) and Ewakuacja (2011). The track featured in the following, ‘Szadź’, (‘Rime’) was released on their début album.

The era of Polish coldwave, or zimna fala, in the mid-80s, was a time of rebellion of young people against the authorities and formed a non-interchangeable Polish sound. The footages from the Jarocin Festival show, how much recognition this musical style had gotten. Although the Polish coldwave seemed to have disappeared in the shadows in the early 90s, its influence, in Poland as well as internationally – has hardly diminished.

If you want to find out more about the dark culture of Poland’s 80s and can understand the Polish language I recommend the recently published book ‘Gdzie oni są’ (‘Where are they’) by contemporary witnesses Artur Szuba and Kasia Andrzejewska, which resembles a neat and fondly collected chronicle of this time.

In summer 2017 we made a documentary about several Polish coldwave bands, You can read about and watch it for free here.