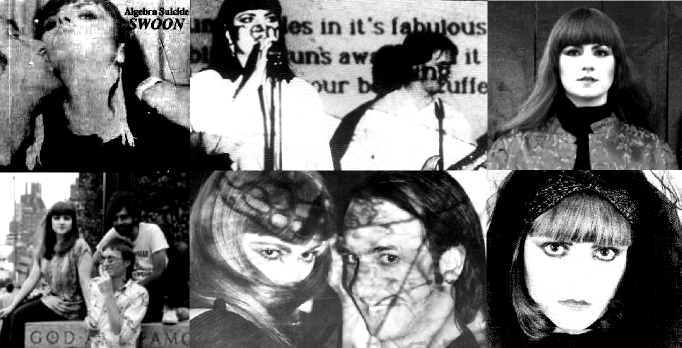 The late 70s and early 80s have been a fruitful time for the creation of interesting and creative music, which was generally categorized under terms as “new wave”, “darkwave” and “post-punk”. That makes it difficult to explain, what music and philosophy these genres represent. Those musicians saw that the music scene needed some innovation and that the early 80s were the right time for a change.

Algebra Suicide from Chicago achieved some reputation due to their unique musical style. The duo consisted of Lydia Tomkiw, daughter of Ukrainian immigrants, and Don Hedeker, and was active from 1982 to 1995.

Tomkiw was already known in the Chicago underground for her poetry-readings and published several of her poems (e.g. The Dreadful Swimmers and Popgun Sonatas, 1980).
Don Hedeker has been active in a band called The Trouble Boys and met Tomkiw during a concert in 1980. Shortly after that they became a couple and founded Algebra Suicide, a name they derived from one of Tomkiw’s poems.

The musical style of Algebra Suicide is the fusion of Lydia Tomkiw’s poems and the music of Don Hedeker. Usually Algebra Suicide are referenced as “poetry-music duo from Chicago”.

Algebra Suicide do not focus on the music itself, but much more on the poems, or better, how the words are accompanied and supported by the sounds and effects. Every tune seems to be on its perfect place.

Don Hedeker was responsible for the music. He practically made all the music by himself, using a drum machine, distorted guitars and synthesizers.

Lydia Tomkiw’s vocals are fitting perfectly to the atmosphere of their music. She is the female Lou Reed. Indeed, Algebra Suicide sounds like a lightweight later version of The Velvet Underground. Tomkiw’s voice has many facets, sometimes it sounds fragile, sometimes very strong. Also effects like chorus and echoes are used on the vocals.

From a more simple and minimal sound on the first albums, Algebra Suicide changed to a more epic style on the last two albums Swoon and Tongue Wrestling.

Tomkiw’s solo album Incorporated bears a much more rocky sound than Algebra Suicide. Also the use of synthetic effects is more tense.

One of my favourite songs by Algebra Suicide is ‘Just a Love Song’. It is one of their minimalistic pieces. Listening to this song for the first time I fell in love with Lydia Tomkiw’s vocals.

The compilation The Secret Like Crazy is maybe the best point to start. The songs on this album are still minimalistic, but some already show features of how Algebra Suicide will sound on the later albums. ‘Why No Action Is Taken?’ and ‘In Bed With Boys’ are here the most outstanding tracks. ‘Little Dead Bodies’ sounds maybe the most like The Velvet Underground.

On Tomkiw’s solo album Incorporated you have to listen to the song ‘From the Place Everyone Avoided’, it is amazing!

What happened to Algebra Suicide?

Maybe too perfect to be true seemed to be the symbiosis between Lydia Tomkiw and Don Hedeker. After the Chicago-duo also went on a European tour in 1990, where they were highly acclaimed by a small, but firm, group of followers, they started to struggle in the early 90s, but coming together once more to make their last album in 1993 – Tongue Wrestling. After their divorce in the same year they finally split-up in 1995.

In 1991 Tomkiw bought the Club Lower Links, which has been the venue of most of their shows, but went bankrupt soon after in 1993.

In 1995 a solo album with the title Incorporated has been published by Tomkiw in cooperation with several other musicians. After that she disappeared from the public attention.

In 2007 Lydia Tomkiw has been found dead in her flat. On Wikipedia was written that she died of “unknown reasons”, but on a blog of a friend of hers it can be read that she had heart problems, which might have caused her death.

4 thoughts on “What happened to… Algebra Suicide?”