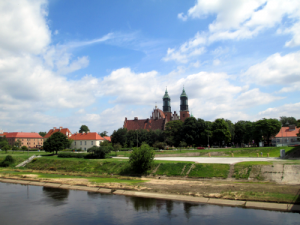 Three years ago I have already been to Poznań. As far as I can remember I quite liked it. That’s why I put it on my route.

Poznań is the fifth largest city of Poland and the capital city of the historic region called Greater Poland. For Polish history Poznań is very important, as the Polish dynasty Piast founded the first Polish kingdom in the 10th century. The first rulers, Mieszko I and Bolesław Chrobry, are buried in the cathedral of Poznań (see picture). Later the political centre of Poland was shifted to Cracow. 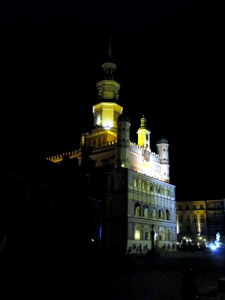 I came by train to Poznań. The railway station is not very central, it demands a walk of about 25 minutes to the old town centre (stary rynek). The really pretty market square is after those in Cracow and Wrocław the third largest in Poland. The market square in Poznań had a similar fate as the one in Wrocław, it has been severely damaged during WWII. It has been successfully reconstructed in Classicist and Baroque style, except for two façades, which were kept in a Gothic style.

One of the nicest buildings in Poznań is the town hall (ratusz, see picture). Every day at noon two goats appear on the clock tower and fight. There is a legend behind the goats, which I shall quote here from Wikipedia: 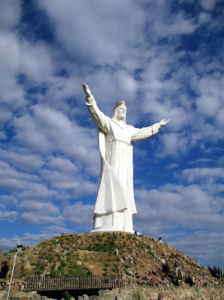 A few friends of mine from Austria are at the moment in Poznań for taking a Polish language course. Together we got into a car and drove in direction West of Greater Poland. On the way there we saw Jesus! No, I am not suddenly a religious fanatic nor am I insane. Near a town called Świebodzin, next to the highway is the largest statue of Jesus in Europe. He is really huge, 33 meters. We went up the hill he is standing on, enjoyed the view and continued our excursion to Zielona Góra. 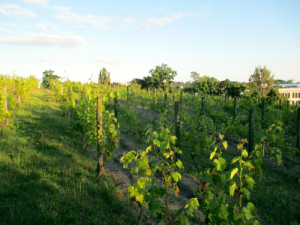 Zielona Góra is maybe best known to be one of the few regions in Poland, where wine is growing. If you are in this region it is definitely worth to visit this city. I look very atmospheric (not least because the Roman god of wine, Bacchus, appears several times in the centre) and neat. Near the centre is a palm house on a wine hill. We had good luck with the weather, so the panorama was priceless.

Today we went to the cathedral island of Poznań. It is in the East of the old market square, not very far away. There is an interesting red bridge behind the cathedral, where one could walk over the bridge railing. Nothing for people with fear of heights. 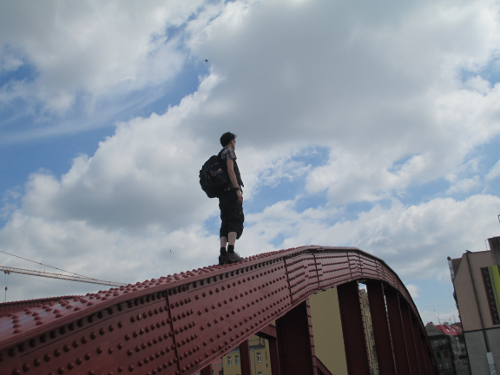 This will be my last day in Poznań, before I will continue to the next destination: Gdańsk!

3 thoughts on “Greater Poland – From Poznan to Zielona Góra”