Did you ever hear about Grave Jibes Fanzine? It is a Russian magazine with high-quality content about post-punk/new wave music. The magazine can be downloaded for free (either in English or in Russian) at the address: www.gravejibes.com. Unfortunately, the magazine was discontinued in 2012. To find out why I contacted the mastermind behind the project, Pall Nattsol. In the following interview he talks about his experiences and contacts during his journalistic work, about his plans and reveals, why Grave Jibes doesn’t exist any more.

Nattsol: My real name is Pavel, but some could know me as Pall Nattsol. I started working for the goth/coldwave scene in 2006-07, I think. For a while I’ve been DJ, but then I formed a band called Grotesque Sexuality and a webzine called Grave Jibes Fanzine. Both projects lasted until 2012; after that I formed the goth punk band Salome’s Dance and joined the new minimal synth magazine RetransWave (first issue hopefully will appear in a few months). Also your readers might know me from the liner notes in the booklets of the CD reissues of Schleimer K and Bone Orchard.

Nattsol: Well, Grave Jibes became a very complex enterprise. A lot of people were involved and all on a hobby basis, what meant that they worked for the zine only when they had time and only if I gave them a kick. It’s exhausting, moreover, due to such complexity, we had constant delays what caused a sort of sense of guilt towards the musicians I worked with. I felt I was always excusing for delays, and it took a lot of nerves. I miss Grave Jibes very much, of course, but at least I can say that I have less stress these days (well, not quite, to be honest, I have a lot of stress with my job at a record shop and the new band).

Nattsol: Basically there were about 6-7 persons who were constantly involved (the list on our website is a bit out of date, but still you can check it on our homepage and we also wrote in every issue who was taking part). Another thing to keep in mind is that there regularly appeared people who seemed to be enthusiastic and offered some content but never got it done.

Nattsol: There were a lot of legends. As for Borghesia – Josh from Dark Entries gave me Aldo [Ivančić]’s e-mail. Actually, it was funny because at that time I got used to e-mail interviews, but never did a live interview over Skype (the option on which we agreed with Aldo), so I felt extremely nervous. Moreover, Skype had some problems, so we even ended up with Aldo calling to my home phone to Russia from Slovenia! After a while it worked and we made a big interview and just had a good talk. I remember, I got completely drunk in the end. Generally, it’s easy to find the people, even though I assume some of my longest interviews (like with Frakture) lasted for 15-18 months from the first message. 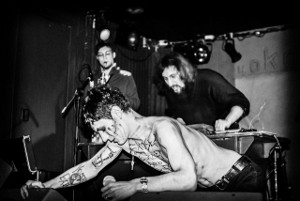 Nattsol: A lot of those! At first, I should say that I decided to make a fanzine in one night without having skills, no team, just nothing at all. I chose the name and wrote a few messages through my space, to Clair Obscur, Complot and a few other bands, I don’t remember which ones now. Christophe from Clair Obscur answered me the same night (he’s actually one of the most intelligent musicians I’ve ever talked to), so for me there was no way back. Important was the interview with Andi Sex Gang of whom I was a big fan at that time, but it was a hard thing to do, because when you’re too much into someone’s music it’s even harder to make interesting questions than to someone with whom you’re not familiar that much. Both interviews Corine from Exces Nocturne (another band I really love) were very intimate (she was a great support for my projects from the first steps and actually she ended up doing some vocals for my band, Grotesque Sexuality). Also, I should mention the interviews with the label owners – Markos from Eirkti, Alex from Infrastition and Carlo from In The Night Time. They all are extremely great guys with true love for music and we’re still in touch with them. Generally, I think I did more than 100 interviews and 20-30 of them were really good and led to further communiction. Should I also mention interviewing Specimen a few months after trying Jonny Slut’s stiletto shoes? 🙂

Nattsol: I’ve been flirting with this idea for some months but hesitated to make it happen because, as I told, I had no skills, no team – nothing at all, and my English was pretty bad at that time. The determining point was when I DJed before The Last Days of Jesus show in 2008 and at the afterparty I talked to their singer Mary0, who also was one half of batcave.sk and he told that they started with a fanzine either and that helped them to develop the scene. After that conversation I decided that if I don’t do that, noone ever will. I started and a few mates showed their interest to get involved. The result of it you probably already have seen.

Nattsol: A couple of bands of each genre and the urge to remain alone within the small genre. I see no unity and many of the bands from the late 00’s broke up. At least now I hardly can find a band to set up a gig with. However you can check my current band, Salome’s Dance and some fellow ones – Prazdnik and Loverlost (band of Grotesque Sexuality bass player). There also are a lot of other bands from different places – Twinmachine, Scofferlane, Особые Условия etc, but I’m not that much in touch with them.

Nattsol: My new band can be heard here – http://salomesdance.bandcamp.com. As for Grotesque Sexuality – there’s quite much of it on the web, however, I suggest our latest live stuff, since our studio tracks are quite poor technically, whilst live we were raw either, but with a sort of tension and energy. You can see them on the Grave Jibes youtube channel – VideoGrave (http://www.youtube.com/GraveJibesFanzine) – it was the project for which our team filmed the bands that played on Grave Jibes parties (we did 10 parties total and even booked a few bands from abroad for that) and several fellow events.

Nattsol: Avant-Garde from Rome and Murnau’s Playhouse from Tampere, Finland. Also, we just did the party with Silent Scream from Helsinki, but as a part of “SPb Decay” parties (it was the third party of SPb Decay). The guys just left Saint-Petersburg yesterday.

Nattsol: I don’t know, really. The things always change, last year I played with Salome’s Dance and we keep up now, but I think more of Wound Culture that would be closer to Grotesque Sexuality on a conceptual level. As for the zine – now I work for RetransWave (I recently finished interviews with Andreas from Techniques Berlin and Matthias from Bal Pare and Geisterfahrer, and now I am waiting for the responses from Cati (Deux). Also, I probably will join some other projects. Grave Jibes, even if to be resurrected, never will be the same. Grave Jibes was not only me but other people who’re not motivated that strongly, and I must confess, with 20 it was easier to start such an enterprise than with 25 as I’m married and have two jobs. To be honest, I still wait for younger guys to say their words, and I’m always as supportive as possible.