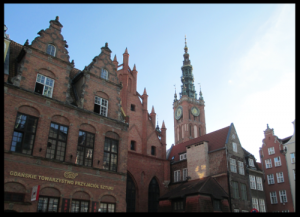 As I am very interested in history I always wanted to get to Gdańsk/Danzig. A lot of times I have been to Poland before, but never managed to come so far North. A dream came true, when I stepped out of the train from Poznań and my feet touched the first time ground of this lengendary city.

Already the building of the railway station is impressing. It is quite central. The ‘main city’ (główne miasto) I entered through the old city main gate. The Long Street (ul. długa) leads to the Long Market square (Długi targ), where since the 17th century lived the most wealthy citizens. Everywhere are wonderful façades in Baroque and Renaissance style.

Gdańsk has a very special and interesting history. This time I shall go deeper into the historical part, because a historical basis is crucial for understanding this city. At different times the city has been part of Poland, Prussia, Germany and twice it has had the status of a ‘free city’, was a self-governing entity, was like an own state.

Since the 15th century Danzig had the status of a Hanseatic city. The Hanseatic League was a confederation (commercial and defensive) of merchant guilds and their market towns, dominating trade along the coast of Northern Europe. With this status Danzig gained privileges and more autonomy. Through trade the city became rich, its strategical position made it the bone of contention between Prussia/Germany and Poland. It was also a multi-ethnic city. 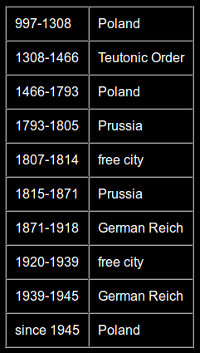 From 1807-1814 Danzig was the first time in its history self-governing, called Freistadt Danzig or Republic of Danzig. After the Congress of Vienna 1914/15 the city has been incorporated into Prussia.

The Free City of Danzig between the two World Wars has been under the protectorate of the Council of Nations, but functioned like an own state and had a size of 1950 km². The free city had an own flag, anthem and currency.

The Germans commenced World War II with a bombardment of Polish positions at Westerplatte (a part of Danzig) and the landing of German infantry on the peninsula. The city was officially annexed by Nazi Germany, where a big part of the population was deported and killed. After heavy Allied and Soviet air raids in 1945 the city was freed in the same year by the Soviet Army. The city was devastated. 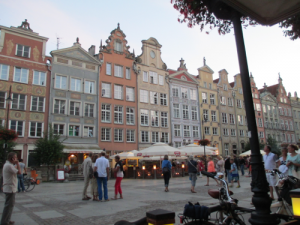 Today the city is part of Poland again. It has been reconstructed really nicely. The Long Market (see picture) is full of neatly restored façades, which you can admire from one of the numerous coffee houses.

Many buildings, like in other Polish cities, are made from bricks. What I didn’t know was that the biggest brick church in the world is in Gdańsk. The city of Gdańsk lies on the river Motława. Next to the Long Market is a promenade, where the medieval port crane, called Żuraw, is the main attraction. There is now a maritime museum in it.

Gdańsk grew so big that it has merged with the neighbouring cities Gdynia and Sopot. Together they are mostly referred to as Tricity (Trójmiasto). The three cities are well connected by public transport. Also the paninsula Hel to the North can be easily reached with a ferry boat.

In the Western region from Gdańsk lives an ethno-linguistic minority, called Kashubians. They are officially acknowledged in Poland, and also the Kashubian language is taught in Polish schools. If you prefer to take a break from the touristic city life, this would be a good opportunity to go to the countryside and visit the hospitable Kashubians. The town of Kartuzy is a good starting point.

One more day I have to enjoy wonderful Gdańsk. My next station will be Toruń.