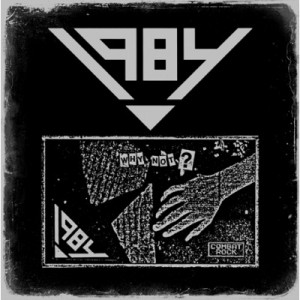 Again I return to the topic of Polish new wave/coldwave. This time a legendary band, maybe my favourite among many amazing Polish bands, will be featured. It is called ‘Tysiąc dziewięćset osiemdziesiąt cztery‘. For non-native speakers of the Polish language this name might  be a little difficult to pronounce. It means 1984.

During their long history the band 1984 changed their sound several times, whereas the essence stayed the same. A potential explanation for that are the perpetual reformations of their line-up, co-founder Piotr Liszcz being the only constant in 1984, until today. Experimental use of guitar and bass, blended with a rebellious rage and musical audaciousness forms the voice of the 80’s in Poland.

In their almost 30-year long history 1984 gained a legendary status throughout Poland’s coldwave/post-punk scene. Let us now take a look on their development from the mid-80’s until today.

The band wasn’t formed, as the name would imply, in 1984 (the name was derived from the Van Halen album of the same title), but in 1985 in Rzeszów by guitarist Piotr Liszcz, singer Krzysztof “Bufet” Bara, bassist Wojtek “Pancerny” Trześniowski and drummer Leszek Cielak. From the beginning it is hard to keep track of the band’s line-up, as it has changed several times. Piotr Liszcz is the only permanent member throughout their history, working together with: Janusz Gajewski, Roman Smutny Rzucidło, Paweł Czester Tauter, Maciek Miernik, Darek Czarny Marszałek, Marek Kisiel, Grzesiek Wesołowski, Ziemiowit Nyzio i Andrzej Paprot.

Before their first change of line-up, 1984 played at the Rock Plus festival in Rzeszów and made a radio session for Radio Rzeszów. The new line-up was responsible for the band’s most important songs ‘Specjalny rodzaj kontrastu’, ‘Tu nie będzie rewolucji’ and ‘Biała chorągiewka’.

Still in the same year, 1984 took part at the Jarocin Festival, where they would later also appear regularly.

In 1987 they recorded their début-album Specjalny rodzaj kontrastu (Engl.: Special kind of contrast), which was, due to the loss of the original tape, not released. Therefore, their second album Radio niebieskie oczy Heleny (Engl.:  Radio Helena’s Blue Eyes) became then their first released – in 1991, followed by Anioł w tlenie (Engl.: Angel in Oxygen) in 1994.

While being very active in the Polish underground scene from the mid-80’s until the end of the 90’s, performing also at the Castle Party in 1999, 1984‘s activity steadily decreased.

In 2003 the project has been resumed as a trio, consisting of Piotr Liszcz, Wojtek Trześniowski and Darius Marshall. In the same year  their first album Specjalny rodzaj kontrastu has been found and, finally, issued.

Since 2006 the group continues to make music as a duo (Piotr Liszcz together with Robert Tuta from industrial rock band Agressiva 69). Together they released the album 4891 (2007), the first single ‘Całe miasto śpi’ (Engl.: The whole city sleeps) was critically acclaimed. Nowadays 1984 are again active on stage, sometimes performing with former members of the band.

In 2011 one of their first recordings, which was before only given out at their concerts, Why not?, has been re-issued and in March 2013 the band entered the studio to record material for a new release.

Special thanks to Katarzyna Andrzejewska-Szuba from CHAORDER for providing me with information on the band 1984.