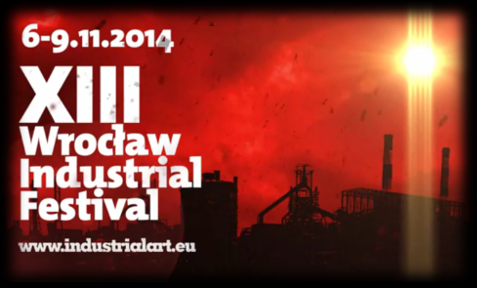 After an endless car ride we eventually arrived in Wrocław, the capital of Lower Silesia, Poland. Uncountable times I have spent here, made some dear friends and it appears that behind every street corner, below every tree I can find pieces of memories and stories of my personal history with this city. This time I came here because of the Wrocław Industrial Festival, organized this year already for the 13th time.

I have been to this festival before, in 2011, when I saw concerts of Absolute Body Control, Clock Dva and Astrid Monroe, among others. As I definitely enjoyed the atmosphere then, I decided to partake of the festival again. The following years I unfortunately couldn’t make it, also in 2014 I could only visit for two of the four days the festival lasted.

Anyway, right after our arrival we went straight to the Stary Klasztor (Old Monastery). The drones coming from the old walls the gathering of people dressed in black made it easy to find the exact location. 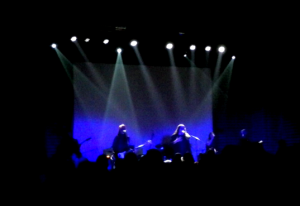 The main stage, Sala Gotycka (Gothic Hall), was found upstairs. The Gothic Hall with its ribbed vault contributed very much to the dark, but friendly, atmosphere. The Stary Klasztor, however, was more like a bar or a coffee-house and therefore a good place to relax your ears inbetween while enjoying a cigarette. Concerts were taking place at both locations. Above the Gothic Hall was a place for buying band merchandise. The visitors seemed to be friendly, many Germans came. The average age of the crowd was between 30 and 40 – fortunately no teenies in pink fishnet stockings and Hello Kitty purses.

I have to admit that I didn’t know a lot of the bands performing this year. I was curious about the headliners, The Legendary Pink Dots and, of course, Borghesia. But, in the end, I was most impressed by early Death in June vocalist Patrick Leagas with his project Sixth Comm and a post-punk band from France, Frustration.

I have to lose some words about Borghesia: during the time I have been living in Ljubljana, Slovenia, I listened to Borghesia a lot and people were talking about this legendary band. Back then I never had a chance to see them live. So I was very anxiously awaiting their concert in Wrocław.

The whole Gothic Hall was crowded. Shortly after they entered the stage, they played one of their biggest hits ‘Ni Upanja, Ni Strahu’ (‘No Hope, No Fear’). But then they started with very experimental, noisy stuff and something, that I never could have imagined, happened: More than half of the crowd just left. So did I. The difference between what I expected and what I got in the end was a hole as big as the Grand Canyon (I have felt this only once before, but less intensively with Katatonia).

Except for the Borghesia-letdown I left the festival in a good mood. This festival is not “just” about the music, it is the sum of the atmosphere, the people, the location and the fog embracing the city. I will surely come again next year.