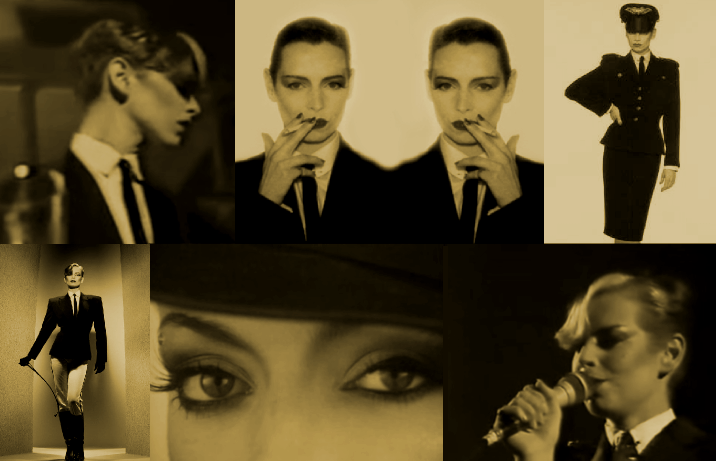 Can you imagine a hybrid between Marlene Dietrich and Annie Lennox? A music between the sounds of the Weimar Republic and synthpop? For a short while such a blend existed, in style as well as in music. Most pioneers of synthpop in the late 70s/early 80s were eager to surround themselves with a fog of mystery, but one woman managed to become totally obscure. Perhaps you have never heard of her. Her name is Ronny. In early 2015 the synthpop music scene suffered a big loss: the death of Blitz club/New Romantics leader-head Steve Strange (Visage). Re-visiting the history of early synthpop I discovered Ronny, singer and model, masculine and feminine at the same time.

Originally from Northern France’s industrial region, Ronny left for Paris at the age of 14. Not much is known about that time, except that she was lying about her true age and doing “terrible jobs”. Later in her young life Ronny took dancing classes and became a model.

Legend has it that Ronny met Rusty Egan at the Parisian club Privilege and he introduced her to the London Blitz Kids movement. After moving to London, Ronny soon became an omni-present guest in the Blitz Club and in the music of the New Romantics generally. She appeared on album covers and in several video clips.

But Ronny didn’t only show her pretty face, she was also actively making music. Although she collaborated with renowned musicians such as Midge Ure, Vangelis, Steve Strange, Rusty Egan, Zaine Griff and Yukihiro Takahashi, she only left us with a handful of songs.

Ronny’s music is of an own kind. Synthpop, though strongly reminiscent of the style of the 20s cabaret of the Weimar Republic style. But it was actually not the music that made Ronny so unique, it was rather her voice and style: “Her voice is awesome, but what really inspires me is her interesting style. She managed to look masculine, sensual, posh, new romantic, Parisian – all at the same time. If she doesn’t inspire you with all that beauty & style, then I don’t know what does. [1]”

There are some amazing footages of her rare live-performances to be found on YouTube, so that we can imagine how it was back then.

The song that lured me into Ronny’s charm was ‘Blue Cabaret’. It sounds a little bit like Gary Numan’s ‘Are Friends Electric?‘. Since I know this song it has a solid place in my playlists.

‘To Have And Have Not‘ is another master-piece. It sounds more modern than ‘Blue Cabaret’ and is a very danceable tune.

Only recently I found out about ‘Strange Obsession‘. This is actually a song by Japanese legend Yukihiro Takanashi which features Ronny and Zaine Griff on the vocals. It sounds as 80s as it can get.

What happened to Ronny?

After her short musical career Ronny disappeared from the public. Even intensive research on the Internet and other available ressources only reveal that Ronny eventually left for France – allegedly due to lack of success with her music. Maybe she returned to modelling or – who knows? To me she is still one of the most charming synthpop musicians ever.

5 thoughts on “What happened to… Ronny?”