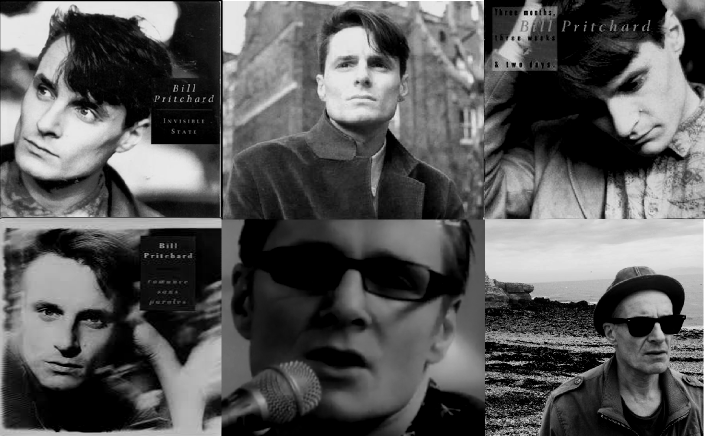 Have you ever heard of the British singer-songwriter Bill Pritchard? No? Neither did I, until I recently came across his name through an obscure 80s playlist on YouTube. The list was rather mediocre, one or the other ear-worm amongst them, but nothing special. The very last song was Bill Pritchard’s ‘Invisible State’. “Wow”, I said to myself, “let’s find out more about this guy”!

Bill Pritchard was born in the West Midlands, near Stafford. Musically active already in his youth, a longer stay in Bordeaux, France, inspired him and pushed his musical career further. He and two of his friends had a weekly show at the radio station named La Vie au Grand Hertz, where Bill became acquainted with some French musicians.

In the late 80s Bill Pritchard gained attention with his singles ‘Tommy & Co’ and ‘Invisible State’.

Bill Pritchard’s music is – especially in the beginning of his musical career – heavily reminiscent of the new wave/post-punk of the early 80s. Characteristic for Prichard’s music are his fantastic baritone vocals and his elaborate introspective lyrics (both were compared to Morrissey’s). His early stuff was mostly accompanied by an acoustic guitar, while with By Paris, By Taxi, By Accident Pritchard he released a mostly electronic record. On Trip to the Coast he returned to his musical roots.

There are, actually, quite a few songs I can recommend to listen to. Let’s start with the one I encountered first: ‘Invisible State’ from 1989.

From the same album as ‘Invisible State’, ‘Romance Sans Parole’.

From Pritchard’s album By Paris, By Taxi, By Accident, the song ‘Metro’. His music sounds darker on this one and his vocals almost like Lou Reed’s.

What happened to Bill Pritchard?

Between 1998 and 2005 Bill Pritchard disappeared from public attention, as he returned to college to finish his teacher’s degree. At present he resides near Birmingham and works as a professor for French. He has still a huge affinity for France, but so has France for him. While being not well-known in the UK, Pritchard had and has his biggest success and his most faithful fans in France. After a second longer break he recently re-appeared with the album Trip to the Coast.

In my opinion, Bill Pritchard is a very underrated musician.  By all what I read from and about Bill Pritchard, he seems to be a modest, interesting and likeable person. In an interview from 2014 he was asked about his attitude towards fame: “Ca doit-être horrible d’être célèbre non ?” (“It must be horrible to be famous, no?”)

2 thoughts on “What happened to… Bill Pritchard?”