The 1980’s have been a decade of big social changes, which was only possible after the punk movement eradicated culture to a zero-point in the late 70’s. Out of these ruins whole new pastures were able to grow – inspiration for those who came thereafter. A guy from Chicago denied this new wave in music, simply wanted to make punk. That precisely he became the flash-point for many musicians he might have neither expected, nor accepted. Maybe you have heard of him. His name is Steve Albini.

Many musicians didn’t get the attention they deserved, while they have been active musicians. Maybe the best example for this phenomenon is The Velvet Underground. Ahead of their time for a decade they got acknowledged relatively late and had no commercial success while they existed. The same is true for the band founded by Steve Albini from Chicago in 1982 which he called Big Black.

The first EP, entitled Lungs, Albini recorded in 1982, alone with his drum machine which he always treated as an own member (as Roland). This EP he mainly recorded to recruit members to Big Black. Albini added some gimmicks to Lungs, like bloody tissues, dollar notes or condoms. 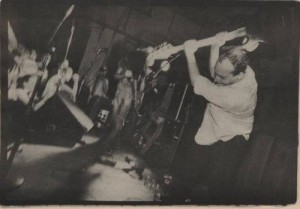 Soon the first musician, guitarist Lyle Presslar, joined, but left soon due to struggles with Albini. One year later he could win Jeff Pezzati on the bass and Santiago Durango on the guitar, with whom he recorded two EPs: Bulldozer and Racer-X.
Pezzati left in 1984, his replacement was Dave Riley. With the new line-up the albums Atomizer, Headache and Songs About Fucking were recorded.

Through contact with Sonic Youth, Big Black could get some attention of the public with the album Atomizer. On the Headache EP Albini put a sticker, which said: “Not as good as Atomizer, so don’t get your hopes up, cheese!” He didn’t mean it as a joke, he really wanted to warn the fans that this EP is worse than Atomizer.

The musical style of Big Black can be solely described as weird music. It is provoking, offending, ironic, cynical, harsh, rude. Albini’s vocals are just words puked out in disgust. Big Black produced experimental music, played with sounds and effects… and a lot of noise.
The lyrics of Big Black are mostly inspired by everyday situations. Some listeners did not understand their concept of irony and called Big Black racist and sexist. As reaction on this Albini wrote even more provoking and offending lyrics to piss off the, as he called them, hipsters.

Albini just wanted to make punk, but he made much more: Big Black became a big influence on industrial music and post-punk. By the attitude Albini surely was a true punk in all its facets. But for simply making punk music they were too good musicians. A label appears over and over again, when researching for Big Black on the Internet: Post-hardcore. Maybe Big Black were for post-punk, what Black Flag have been for punk. 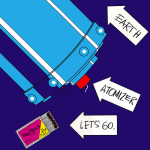 A very interesting piece of music – an opinion on which Albini certainly wouldn’t agree on – is the first EP (1982) from the still one-man-project Albini, called Lungs. The song “Dead Billy” is definitely not a punk song, but a post-punk one. The synthesizer sound already reveals what a few years later will become “Minimal Wave”. Maybe Dark White would have sounded completely differently without the influence of Big Black. This song represents the death of punk, but at the same time shows its reincarnation in another costume. Everybody knew that the punk of the 80’s would look differently – Albini evened the way.

Another outstanding song is “Kerosene” from the Atomizer album in 1985. It is a kick-ass song, consisting of elements from punk, funk and heavy metal. You might find many contemporary songs sounding similar to “Kerosene”. It describes the boredom of a teenager growing up on the countryside and the resulting self-destruction.

What happened to Big Black?

After the 1987’s album Songs For Fucking Steve Albini decided to de-band Big Black. He saw that the air is out of the project, every innovation, which Big Black were possible to make, every damage on music, had been done.

Albini decided to become a producer (he calls it “recording engineer”). Even today he is highly acclaimed in his field and has an outstanding reputation. He has produced musical acts like The Pixies, Nirvana or PJ Harvey. He also plays in the bands Rapeman and Shellac.

In 2006 Big Black came together once again for a concert for the 25th anniversary of the label Touch and Go Records and were playing four songs.