European Steampunk outfit Victor Sierra just have released their third full-length album with the title Go for the Strange. For this reason I am re-publishing this interview which I did with Commander Bob Eisenstein two years ago (originally published on Polish webzine AlterNation). Find out how this interesting personality would describe the music they make, how he discovered Steampunk and what this idea means to him.

Savetier: How would you describe your style of music to someone who did not yet listen to it?

Commander Bob: Ouch… the question I fear most… Let’s say: retro-futuristic inspired epic electro rock project. But more than a project, Victor Sierra is a universe. We have our own way of imagining our work. There are many things to find out through many facets and layers, because the obvious is boring. Our music is fueled by many different substances…

Savetier: One can definitely see that Victor Sierra works with a special aesthetic. The artwork, the music, the videos I saw on youtube… Do you make this all by yourself? And, as the visuals seem to be an important factor for the band, do you have any visual artist (any kind, could be a painter or a moviemaker) that you find particularly inspiring?

Commander Bob: You’ve got it right. We almost do everything ourselves: music and video and our stage outfits as well (designed by Anouk). It’s the first time I’m asked this question about visual artists… I don’t know… really… I’ll think about it for the next time we have a conversation. I promise.

Savetier: So you also see the DIY as an important factor of Steampunk lifestyle? How “Steampunk” are you in your every day life?

Commander Bob: DIY is the main thing. I’ve always been used to do everything myself, steampunk or not steampunk. I enjoy a lot to make contraptions for our stage decor. It’s very relaxing and creative for me. I don’t live the lifestyle everyday regarding my outfit and such. But I definitely live it in my mind and about steampunk itself I could say that it is an expression of “uchronia” (the time that doesn’t exist as in “utopia” is the place that doesn’t)… I enjoy “what ifs?” very much. Several realities crossing themselves…

Savetier: How and when did you find out about Steampunk? 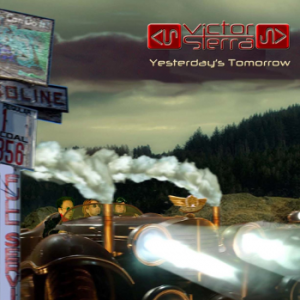 Commander Bob: When Big Machine joined the band three years ago, he told us about Steampunk. We had never heard of it before. So we googled it and everything seemed so familiar to us… The dystopia, the “uchronical” visions, the outfits ands contraptions, the mix of genres… The encounter of romance and technology. Victor Sierra has been a steampunk band from the beginning without us being actually aware. But I would like to mention that Dieselpunk does attract me, as well. That’s how we came to create the Airship Hydrogen Queen -of which I’m the Commander! It’s yesterday’s tomorrow.

Savetier: I had a similar experience of being Steampunk without knowing it a few years ago. Maybe I should put a question for the technically interested: How is the Hydrogen Queen propelled?

Commander Bob: Well… It’s a very “for your eyes only” information… I have to ask Big Machine… It’s a very secret formula. Yet the schematics and diagram of the engine come from an alternate reality I know little of… and almost nothing of the type of fuel they drink… But everything seems very reliable!

Savetier: To come back to the Diselpunk topic: For me Victor Sierra actually fits to both aesthetics, Steampunk and Dieselpunk. How do you see the potential of Dieselpunk? Did it already evolve to an own thing or is it still the little brother of Steampunk?

Commander Bob: As I said before, I’m and we are definitely more in the retro-futuristic area. Meaning that it includes Steampunk, Dieselpunk and even Atompunk. The “what ifs” are very important to me. I don’t see DP to be put under SP as a little brother or sub-genre. I’ve always wanted to use all the material, the universes, the styles and images I could find. What I don’t enjoy much is the willing to stick 100% to an era or another.

Savetier: This open-mindedness is also audible in your music. Your style is quite unique, at least I cannot think of anything similar. And also that you sing in several different languages. How many languages does Victor Sierra speak, when you sum up the knowledge of all three members?

Commander Bob: English, Spanish, French… I can write a bit of Hebrew in my lyrics now and then… I know a lot of words in Yiddish but it is our good friend Elsa Drezner who writes the lyrics in this language.

Savetier: There are many signs in your music and image to build bridges and tear down borders. The Hydrogen Queen can go anywhere, languages are not an obstacle. Is this a statement for internationality?

Commander Bob: In a way, yes. But I don’t see humanity as a whole. Differences are huge and it’s no use to try to avoid them. The Hydrogen Queen is a powerful and magical airship. We can travel behind the lines and cross anomalies (the secret passages between worlds).

Savetier: When will the journey of the Hydrogen Queen continue? Are there any records in progress? 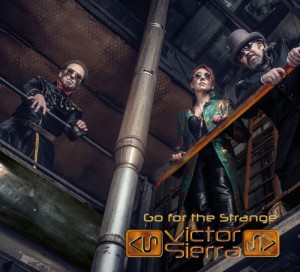 Savetier: Is Victor Sierra the flag-ship of European Steampunk/Dieselpunk/retro-futurism? With your special sound and everything around it you have at least the potential of being it.

Commander Bob: Wow… thank you, dear! We have the ambition to offer our best. It’s our internal propeller!

Savetier: For your way I wish you all the best. In a review on Electric Rain I wrote: “I would say that Victor Sierra finally found their sound, and it was definitely worth to wait. Steampunk irrevocably set foot on the European continent. I was also positively surprised by the multilingualism of the artists: their songs are not just French or English, but also Spanish and Yiddish. And this internationality and open-mindedness is exactly what Steampunk should be about.” Have I been right with my analysis?

Commander Bob: You are perfectly right my friend! I couldn’t say better.

Savetier: Thank you! Now you have the chance to say something to the readers, what might be important to you but was not mentioned yet.

Commander Bob: Well… I just want to tell them that we’re ready to come to perform at their place. For now they can contact me (and I’ll post our (possibly) tour mangement company contact as soon as we sign with them.)
We love to cross borders and we are definitely open to anything interesting.
I am pleased to answer emails whenever I have some spare time, so don’t be shy.
And last but not least, I wanted to thank you for your good job, André!

Savetier: Oh, thank you, my pleasure! One last question I have for you: As we are trying hard to establish the retro-futuristic idea in Central and Eastern Europe, what can you suggest to us to make it more popular from your own experience?

Commander Bob: You have everything in Central Europe in order to reach your goal. Wasn’t Nikola Tesla from Serbia? Time is different in your area, I suppose. Think it over!

Savetier: Hah, we actually had Tesla as topic for one of our Steamed events. 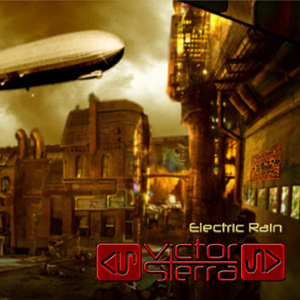 Savetier: We also had the idea of Austro-Hungarian Steampunk, like a locally flavoured Steampunk version for Central/Eastern Europe.

Commander Bob: If you have any opportunity for us to come, let me know about it. We’d love to come to perform.

Savetier: That is something I will seriously think about, Bob! Thank you for this interview!

Commander Bob: Anytime, André! Thanks to you.