2012 went by really fast. But all the good times do. I got to know a lot of nice people, intensified my journalistic work, had interviews with upstarting musicians like Victor Sierra, Calling All Astronauts, Ádám Bérces and The Melting Clock, but also with legends like Jarboe (ex-Swans) and Ronny Moorings (Clan of Xymox). Also I organized music events in Slovenia and Slovakia and worked as a DJ at several occasions. 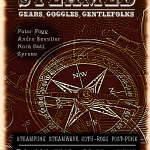 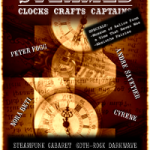 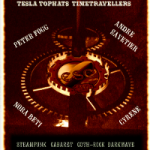 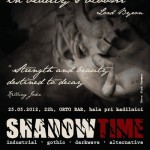 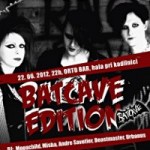 With this article I want to give you a musical review of the past year, show you songs that left an impact on me. Here is my top 10:

Maybe THE newcomers of the year 2012! This song, ‘Someone Like You’ was the first appearance of the English band with the unusual name Calling All Astronauts. The single is kept in an old-school sound, but also intends to transfer a socio-political message. The song has drilled itself into my brain, where it stayed for days. Absolutely a kick-ass song, call it, whatever you like, for me “Goth Punk” works best.

Chemical Waves is a one-man-project by Marco Cattani from Rome, Italy. He formed the project out of a “desire to develop a different sound, the desire to experiment and exploring a new musical form, a deep and intense sound running through dark atmospheres and obsessive rhythms”. All vocals are omitted in favour of samples. Although referenced as “New Wave Sampler Music” the sound of Chemical Waves has a distinct industrial feel, mainly carried by samples and synth tunes, but the high-pitched guitar still plays a crucial role. Also post-rock traces slip in from time to time.

Torul is a musician from Ljubljana, Slovenia, who is one of the pioneers of electronic music in his country. This is synthpop for the 21st century. In 2002 Torul already made a song called “Waterproof Theme”, which has been played in clubs throughout Europe. The singles ‘Try’ and ‘In Whole’ became club hits. Torul‘s recent single is one step further towards a unique sound. In the video you can see a lot of places at my home town Ljubljana.

The Melting Clock – I Call You Alice

The Melting Clock is a solo project of Ryan Genengels from Washington state, existing since 2001. Since 2011, after years of a break from music, Genengels started to work on a new album titled One Tiny Gear. All his songs are available on Youtube. Genengels managed to construct a unique Steampunk sound combined with a story: Elgin is a mysterious character with an obsession he wants to accomplish at any price. The story combines scientific with supernatural elements.

Deathrock’s not dead! The yet unsigned band Tongue from the Czech Republic show us that Deathrock is not just for Californian 80’s vampires. ‘Insensitive’, an old-school track, is my favourite by them.

Minimal Wave is ‘in’. The duo Lebanon Hanover, a symbiosis between a German and an English, make exceptional, melancholic video clips, but an even more exceptional sound. The song ‘Northern Lights’ is not getting boring, although I might have listened to it hundreds of times.

After a little break, it seems, the crazy French girl, who makes exquisite post-punk music under the name DRUNkEN C, is finally back!

Public Image Ldt. – Out of the Woods

The founding fathers of post-punk suddenly re-appeared in 2012 with the album This is PiL*. Although John Lydon’s (AKA Johnny Rotten) voice appears to be a little damaged after all those years it is still a great band with a great song. It lasts almost 10 minutes and audibly bears the spirit of the time the band was formed, after Lydon split from Sex Pistols.

Dead Can Dance – Children of the Sun

Dead Can Dance are an Australian group, which combines influences from very diverse, multi-ethnic musical sounds to an incomparable style. With their 2012 album Anastasis they show again what good atmospheres they are able to construct. The song ‘Children of the Sun’ is a real anthem.

Lebanon Hanover – Why Not Just Be Solo?

Escape the Clouds – Until the End

The Beauty of Gemina – Iscariot Blues

Tongue – At The Beginning…

We Came From Waters – Unfamous Quotes