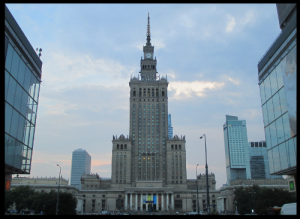 Many people I asked during my trip through Poland, what they think about their capital Warszawa. The answer was mostly not so nice. Perhaps, it is the general dislike of one’s capital city, like Austrians complain about Vienna and Germans about Berlin. However, this was already my second time in Warszawa and I already liked it at my first visit one year ago.

Warszawa is the capital of the Polish province Mazovia and the capital of Poland. That was not always so. Before the centre was moved to Warszawa in 1611, Kraków used to be the political and cultural centre. Some say it still is.

After the three partitions of Poland in 1772, 1793 and 1795 Warszawa became part of the Russian Empire. In this time Poland disappeared from the map for 123 years and has only been re-established after World War I, in 1918. Also this independent Polish state was not meant to last long, after German troops overran the country and started Word War II in 1939.

Afer Word War II Poland was re-established, but was moved as a whole to the West, lost its Eastern territories (Curzon line), including the cultural centre Lwów/L’viv, but gained Silesia, Western Pomerania and Eastern Prussia (Oder-Neisse line). Warszawa was almost completely destroyed after the war. 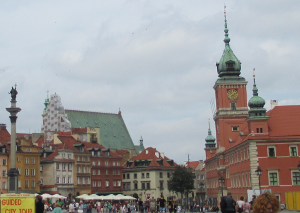 The new Polish People’s Republic indicated a huge re-construction and re-design of their capital. The Old Town centre was almost completely restored between 1949 and 1955 and is since 1980 on the list of UNESCO world heritage.

One of the most obvious traces of socialist times is a huge building in Stalinist architecture, called Pałac kultury i nauki (see introduction picture). It is located near the main railway station, which is one of the biggest underground railway stations in Europe.

The river Wisła divides the city in two halves. There is also an artificial city beach with sand. From the Old Town one can see the huge new stadium, which was built for the European football championship 2012.

In the city quarter called New World (Nowy Świat) there is one coffee-house next to the other. When walking through the Old Town it is hard to believe that it is not the original one. The atmosphere Warszawa transmits is comparable to that of Berlin. It seems to be open-minded, young and bohemian.