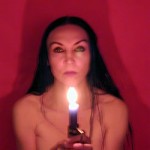 October 2012 a friend of mine told me that Jarboe, former member of trouble-making band Swans, was performing in Ljubljana’s alternative quarter Metelkova. Of course, I did not hesitate to go there, expecting a wonderful concert experience. Swans were one of my favourite music groups for years and I especially liked the records where Jarboe was singing. Her voice is alongside Elisabeth Fraser’s from Cocteau Twins one of the most amazing in post-punk/new wave.

At the concert Jarboe was performing with female pianist Envie and together they created a touching atmosphere. Also some classical songs which she made with Swans she re-interpreted for her solo-project. Unfortunately, the concert was very short.

After the concert I had the honour to conduct an interview backstage with The Living Jarboe herself. As you can imagine I have been quite nervous to face this legend. The interview was very personal, as Jarboe gave an insight in her ‘inner world’.

The interview was previously published on AlterNation, and is re-published here. While reading, I suggest listening to the following song:

Jarboe: You live here in Ljubljana?

Savetier: Yes, I have been living here for three years.

Jarboe: I was here in 1986, and I have seen a change. I think, it is just beautiful now. I love all the artwork and the bridges, the modern things, all the contemporary spirit…

Savetier: When I think that you have toured a lot with Swans, and you still remember Ljubljana…

Jarboe: I remember everything, vividly, when I was here for the very first time, how we came here, where we slept, where we played and what the audience was like.

Savetier: Where did you play that time?

Jarboe: We found a place that was outside. It was a large area, somewhat of a large outdoor festival area. And I remember a dorm, I looked like a dorm, where artists and travellers gathered.

Savetier: Was this the first time you have been to Europe?

Jarboe: No. My first trip to Europe was, when I was still a teenager.

Jarboe: Yeah. My favourite part of Europe is Eastern Europe.

Jarboe: Well, I love Hungary, I love Poland, I love Serbia, Croatia, I like Romania. I like to go to extreme corners. You get away from the main Western major market. I am not interested in that. I am interested in the non-commercial, non-Americanised. I find the audience more open-minded, informed. For Eastern Europe it has been always that way. Everybody is always good fun.

I was on a tour in 2004 in Latvia, Lithuania, Romania, and there were huge audiences. They were interested in what we do and made a much better atmosphere than in the westernised, mainstreamed Western Europe.

Savetier: Have you been also to Poland on this tour?

Jarboe: Yes, we have been to Wrocław. There was an incredible venue. I played there five times, I think, now.

Savetier: How long do you usually stay in one city?

Jarboe: That depends… this is for example our second day here. You know, you are coming to a place, get the experience… It takes some time to get the atmosphere of a city. I wanted to get here already yesterday.

On this tour I will go the second time to Moscow. I love going there, there we are extremely accepted.

Savetier: Do they know you?

Jarboe: I have been there in 2005. They were so excited and enthusiastic, and warm. They were pure energy.

Savetier: I went about one year ago to a Swans concert here in Ljubljana…

Jarboe: Oh, good. Where did they play?

Savetier: At Kino Šiška. It was once a cinema, but it has been reformed to a concert venue. Well, and there it felt like there was something missing… I think I know all your records, when you were still with Swans. And now it feels like the whole thing, I saw Swans and Jarboe.
The question, you get maybe mostly asked: Why didn’t you take part in the reunion of Swans?

Jarboe: Because he [Michael Gira] didn’t ask me to!

Savetier: He didn’t ask you to?

Jarboe: No! He was not even telling me he was doing that. And I was sad. I was traumatised. And, you know, when you play with people for so long, it feels like a family, you feel like that’s your home. So your home shut the door on you, you feel left out and cold. You feel hurt. And the hurting absolutely surrounds you. And I think I felt that more than anyone else. The other people we were working with didn’t have the connection I had with Swans. You know, I was working on the arrangements, on the melodies…

Savetier: But on the new Swans-album Seer you sing background…

Jarboe: After the reunion of Swans without me, I didn’t get upset, I tried to be strong and then we talked for the first time. I don’t really know the reasoning. But I was eager to sing what he wanted me to. But we have done a lot more. I’m never gonna say ‘no’, because I gave up my entire life to be part of it.

Savetier: But you ARE part of Swans! I can’t imagine you without Swans. The new albums by Swans are different.
How is your contact with Michael Gira now?

Jarboe: We have e-mail conversation from time to time. He has a lot to do now, with the album and touring.

Savetier: How did you then happen to sing the background vocals on the Seer album?

Jarboe: He asked me if I would do it. And to create multi-track vocals. I had to record three tracks in a row.

Savetier: But live you are not performing with Swans anymore?

Jarboe: He didn’t ask me to. And if he will ask, we will have a conversation about it.

Savetier: Is there already a tour for the Seer album?

Jarboe: They are on tour already. One week after I am gonna play in Moscow they will come to Europe. He asked me to sing a capella in a show, but the night this show takes place we will be performing in London. So, if he would ask me, in the middle of nowhere, to sing a capella, I would have done that.

Savetier: This is something a lot of people want to see. One short question at the end: Why did you decide to disintegrate Swans in 1997?

Jarboe: I think he was just going to a lot of changes in his life. His manager told him to perform under a different name, because there was a stigma attached to it because we were such a trouble-making band for so many years and I think he was trying to look forward, looking for a way to do that. Although, the last three tours were the best we have ever had. He should have said: Wow, it just could have gotten better, maybe take a break for a year, not to throw it. But he didn’t feel well at that time. His father died, a lot of things happened in his life. I never turned my back on them. When somebody asks: Why did you quit? I never quit! I never quit! I would never have. It was my life.

Savetier: One song I missed tonight: ‘She Crys (For Spider)’. This is one of the most amazing songs I have ever heard. Actually, it is the song I connect the most to Swans.

Jarboe: Oh cool! That’s really awesome! Yeah, we really could have worked that song out acoustically. I think we should do it!

Savetier: But you already made an acoustic version of it, didn’t you?

Jarboe: Yeah, we could have done it for the show. Thank you!

Savetier: Thank you for the interview and the fantastic show!