Banská Bystrica is definitely one of the most beautiful cities in Slovakia. Located in the very centre of the country, the city became prosperous through copper mining in the late Middle Ages. Its beautiful buildings and façades in the old town attract lots of visitors every year.

From 24th to 25th of June 2016 the Rockscape festival was organised for the fourth time in the amphitheatre of this picturesque place. When I looked at this year’s line-up, two bands caught my attention: The Last Days of Jesus (Slovakia) and Laibach (Slovenia).

After some hours of driving through the sun in a car without AC, I arrived in Banská Bystrica soaked in sweat. Fortunately, I found my hotel immediately and took an ice-cold shower. After having enjoyed a coffee on the main square, I asked a lot of people, until I was finally lead in the right direction to the amphitheatre which is located on a small hill.

At the entrance I picked up my accreditation and examined the place. Not too many people yet, most of them dressed in black – metalheads and goth-girls. Beer and merchandise stands everywhere, Stage A was huge, Stage B was located in a circus tent nearby. The atmosphere was nice. I fetched a free beer backstage and sat with some acquaintances in the meadow until The Last Days of Jesus started to play.

The Last Days of Jesus is a legendary Slovak goth/deathrock band, active since 1993. It was great fun seeing them live, as the singer is such a show-man. Jumping around, pulling faces. He reminded me of the Joker from Batman. When I looked around, I realised that the crowd had become bigger and bigger. In the front row some girls and a metalhead were dancing like in trance. 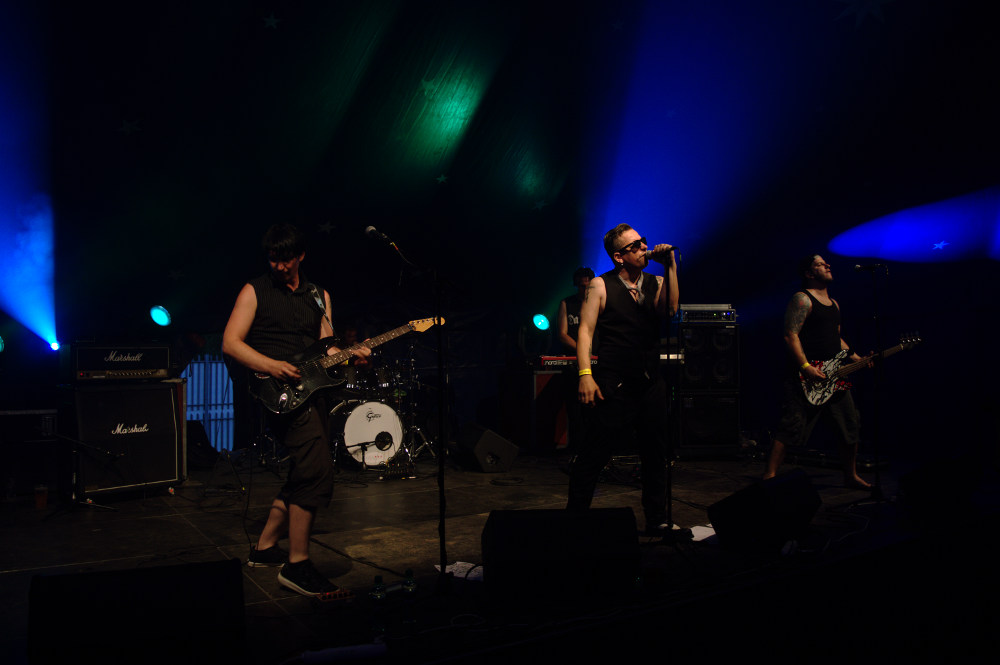 After this concert we sat down again for a beer and listened to the German metal band Disillusion from afar. They had a good concert, however, nowadays I can’t enjoy metal as much as in my late teens and early twenties. Taste changes.

Soon! Laibach should be the next. I went backstage, where I saw Mina Špiler and Milan Fras walking around, preparing mentally for their gig. I also prepared, positioning myself in the moshpit between crowd and stage, intending to take some great pictures.

In April 2016 I had the chance to see Laibach live in Košice. I didn’t expect them back in Slovakia so soon. How was I excited! After the band had entered the stage they started with ‘Eurovision’.

The setlist was similar to the one in Košice, almost the whole Spectre album, the Bob Dylan cover ‘The Ballad of a Thin Man’, some from their Sound of Music tour in North Korea, in the end ‘Life is Life’ and as encore ‘Tanz mit Laibach’.

There are no words to describe a Laibach concert to someone, who has never seen them live. Whenever you have the chance, seize it! I took some nice pics that maybe can give you a slight impression of this monumental, all-encompassing art project.