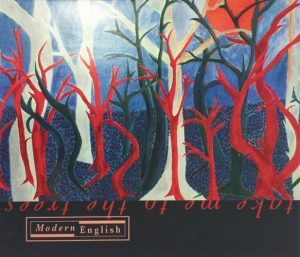 Post-punk legends Modern English are back with their eighth studio album Take Me to the Trees. The band is still modern, as this album has been self-released by the support from a campaign on pledgemusic (it is basically kickstarter for music). It’s the first Modern English album featuring the original band for over 30 years.

As soon as I heard the news I turned on my computer and made my pledge. You can get the download pass for six British pounds, but if you pledge a certain higher amount of money you can get specials, like hand-signed coloured vinyls or original lyrics sheets of the band.

How does Modern English‘s original line-up sound like in the year 2016? When I listened to the first song I thought I downloaded the wrong album. It sounds like it came directly out of the 80s, like Take me to the Trees is the third part of a trilogy with the cult albums Mesh & Lace (1981) and After the Snow (1982). After these two albums the band changed to a more commercial path, mainly because of the success of ‘I Melt with You‘. Therefore, Take me to the Trees feels like coming home, like continuing something that never should have ended.

10 new tracks are waiting for their listener’s pleasure. It doesn’t matter if you are an old waver or a post-punk rookie. Start with ‘Trees’, it is maybe the most accessible song on the record. Songs like ‘Dark Cloud’ or ‘I Feel Small’ catapult you directly back to 1981. The best songs they kept for the end of the album: ‘Flood of Light’ and ‘It don’t Seem Right’. Robbie Grey’s vocals, Gary McDowell’s guitar, Steven Walker’s synth and Michael Conroy’s bass sound like “back then”.

You won’t find hits like ‘I Melt with You’ or ‘Ink and Paper’ on Take Me to the Trees, and that is good so. Let me explain, why: Often, when members of a band re-unite when they are older, they do it because they are out of money. At least people would presume that. I can’t tell if this is also the case with Modern English, but the making-of videos on pledgemusic tell a different story. Modern English make music for the fun of it and let us part-take of the progress. They don’t need “hits” any more, they do what they do best: to perfect the sound they once co-created together with all the post-punk pioneers of the early 80s.

1 thought on “Modern English – Take Me to the Trees”