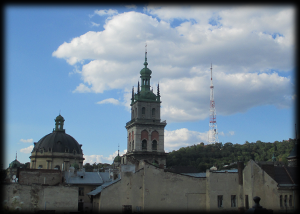 All my journey I could not wait to get to the Western Ukrainian “capital” of L’viv. No city in Eastern Europe I spent more time in than here. L’viv is alternative, uncomplicated and full of energy. It has also a very intriguing and colourful history.

Львів (L’viv), Lwów, Lemberg, Leopolis, לעמבעריק (Lemberik), Լվով (Ilov)… these are all names for the same place. But, depending on what you see or feel, it doesn’t always mean the same. When you walk through the city with open eyes, you can find something Ukrainian, Polish, Austrian, Jewish or Armenian. On the splitting point between the ideological constructs of West and East L’viv (as well as the whole historical region Galicia) was traditionally multi-cultural. Out of this it was also the birth place of five different literary narratives.

Being part of the Austrian-Hungarian Empire until 1918, a Polish town and cultural centre in-between the two World Wars, the city of L’viv became, in the course of the Polish West Shift (I mentioned this before) part of the Soviet Union. Most Polish inhabitants have been displaced to the new Polish territory, namely to the city of Wrocław, which Poland gained through the West-Shift. In 1947 Poland, in a similar manner, re-settled the Ukrainians, living on Polish territory, to L’viv and its surroundings (Operation Vistula). The ethnic composition of the city changed, thereby, dramatically.

Nowadays L’viv is maybe the most Ukrainian city. For the Ukrainian nation enterprise since 1991 L’viv is one of the intellectual and cultural centres of the country. Language is here the main attribute of Ukrainianness. Almost the entire population of L’viv is ukrainophone.

Within Ukraine, as well as outside, L’viv is known as a city full of nationalists. But this resembles only one side of the coin. In the same manner the city is full of positive, alternative atmosphere of departure. The art and music scenes flourish. The tourism, which formerly mainly consisted of nostalgic Poles and Russians, is on the rise also for visitors from other countries. Roads are being renewed everywhere, the façades of the old main square houses look already quite neat. Many young people are learning English or German as foreign languages. L’viv is in the middle of a process of Westernisation.

I am not of the opinion that Westernisation should be the main goal for a culture to be “right”. The last eight years I had the chance to observe L’viv’s metamorphosis. This was a different L’viv back then. And I have to admit that it lost a little bit of its old charm. Still, this is my favourite place on Earth and perhaps it will always be.

With such a long and rich history the capital of Galicia is of course also the birth place of a lot of myths and legends. All around town you can find theme bars, like museums, dealing with the legacy of L’viv. You can get whipped in the Café Sacher-Masoch or visit the “vanished river” Poltva. The river is still there, but has been degraded to a sewer in the late 19th century to make place for the opera house.

L’viv is definitely worth a visit, not only for historically interested travellers. The city is the pearl of East-Central Europe. Let’s hope it won’t get spoiled too soon with shallow party-tourism…