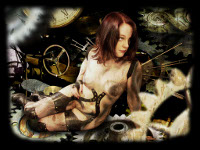 In the second article about Steampunk I discussed the narratives of combining man and machine and the attraction of this topic within the Steampunk culture. In the following I will outline another interesting aspect of Steampunk: The re-writing, appropriation and continuation of fairy-tales.

In the last few years fairy-tales were taken over by Steampunk. Several sites on the internet are dedicated to the re-writing, appropriation and continuation of fairy-tales in a Steampunk-like aesthetic, most notably maybe the website fairypunkstories.com. A quest through a search engine of your choice will make you discover many more. From the online blog enchanted conversation, a description of the rise of this phenomenon can be found (Thornton 2009):

Something odd happened to Steampunk this year. It grew arms, legs and Etsy shops, transforming from a loosely defined niche genre into a widely embraced movement. In the process, “steampunkers” began dusting off old volumes of fairy tales and taking them along for the ride. Suddenly a whole lot of people were not only rediscovering their favorite tales from childhood but mining lesser known ones to “steampunk” (yes, it’s now a verb too). 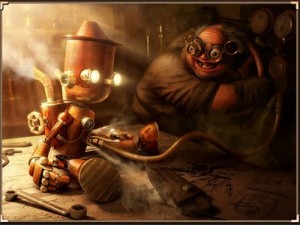 The post-modern storytellers intend to re-enact “the fun-for-everyone tradition of the fairy tales we all grew up with [by] giving them a new twist” (Fairypunk 2012). This new twist is called Steampunk. But why is it Steampunk that is so absorbing for those authors to spend a whole lot of their spare-time with the appropriation of fairy-tales? Steampunk is ”a do-it-yourself genre, one you don’t need any ‘learnin’’ to ‘get’ and both guys and girls are flocking to it in (oddly for any genre) equal numbers” (Thornton 2009). For Thornton the most important factor of making it so suitable to “steampunk” fairy-tales (but not only fairy-tales), is accessibility (Thornton 2009):

Ask someone how they would retell ‘Sleeping Beauty’ if set in the Ming Dynasty and knee-jerk nervousness sets in. ‘Er, I don’t know much about that time period – I’d have to research…’, would be a common response, whereas you ask someone to ‘Steampunk Sleeping Beauty’ (there’s that verb again) and the ideas flow almost instantly. In only minutes suggestions go from ‘you could use that spinning wheel as a way to deliver some sort of poison’ to ideas and scenarios as far flung as ‘time travel’.

Steampunk tales and fairy-tales (as well as myths in general) have a very special thing in common: Both are set in a “time that never was”, are therefore timeless. So why not join them?

There are several points to be criticised when talking about the character of the classic fairy-tale, which could and should be reconsidered, when we have the chance to modernize them. 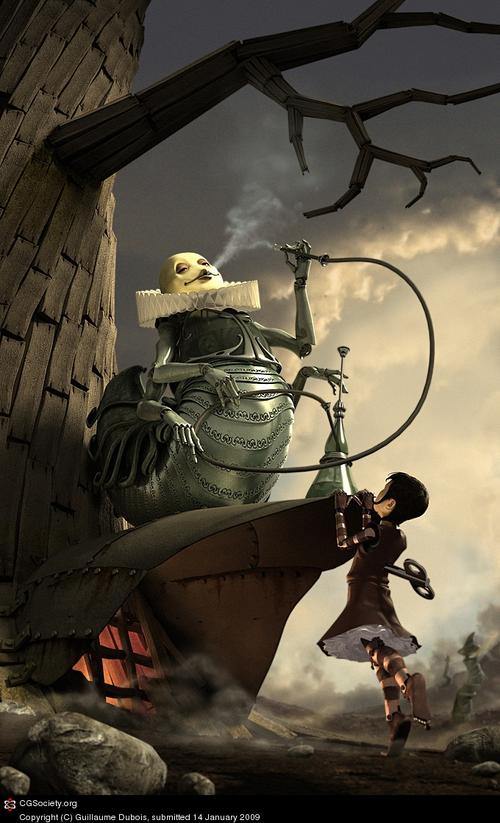 In past times, when fairy-tales were told from generation to generation orally, it was possible for the storytellers to add actual social changes or make minor adjustments to the “now”. Tales were dynamic. However, since fairy-tales have been written down, like the Brothers Grimm did in the beginning of the 19th century, this feature of adding and adjusting was not given in the same dimension any more, as it was the case before. As fairy-tales in their static state are told over and over again until now, mostly by parents to their children, they are most likely to repeat out-fashioned stereotypes, like the image of women from a time, when equality of gender was not even a topic yet, or the classical categorisation of people into classes. Most of the classic fairy-tales available nowadays in book stores have been mitigated and appropriated, but the stereotypes are still there, because they are rooted in the core of the tale’s message itself. Steampunk is one measure which makes it possible to get to these roots and crack them up.

The second thing that should be argued about fairy-tales is their effect. Originally intended to make a point, the message could be lost in an old-fashioned kitschy forest of glamour and enchantment. “Remove the glamour, however, and suddenly the true heart of the tales emerges” (Thornton 2009), as also myth-expert Jack Zipes observed in his book Fairy Tale as Myth/Myth as Fairy Tale (1994); they have “important things to tell us, be we princessed or not” (Thornton 2009). In an enlightened world we have an explanation for each and every “wonder”. Many of those wonders lost their charm in a world where science is able to explain “anything”. One could argue that Steampunk is exactly the one movement where science and technology play a crucial role. But (Thornton 2009):

Steampunk does a very important thing: it puts the average Joe and Jane back into the equation so technology is visibly dependent on its human makers for its existence as well as for maintenance and repair. The result? It gives “wonder” back its place. With the day-to- day back within the grasp of our understanding, we can now notice when something magical happens.

Steampunk has an intriguing feature, which adds some spice to the old fashioned fairy-tales: anachronism, retro-fiction, retro-futurism, the game with time itself. Therefore it does not lack generic “wonders”, but creates plenty of fascinating new ones (Thornton 2009):

In order to see the wonder in fairy tales, people have needed something to remove the magic curse of the modernized fairy tale to wake them up to their true power. You see the irony. The beauty is that once the tales are reestablished as being about down-to-earth people like you and me then it’s not unusual for people to add their own element of wonder so these gritty stories of the human struggle rise from the ordinary to the extraordinary.

The third point of critics is that most of fairy-tales have a happy ending, no matter how cruel the story had been before.

In this time we are overwhelmed by happy endings and “happy-ever-after-ization”, mainly by Hollywood. This is boring and has lost its cathartic character decades ago. A little “Punk” can help to break out of the classical schemes (Thornton 2009):

The edgy (or “punk”) approach of steampunk removes pressure of “happy-ever-after-ization” that popular culture tells us “fairytales” (as one word) require. Suddenly anything can happen, and does.

Steampunk does not allow us only to re-write and appropriate fairy-tales, they can also be continued. 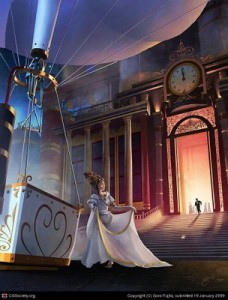 Did you ever ask yourself, what happened after Cinderella married the prince? Would she not be mad at her cruel sisters, who treated her like dirt and tried to bring her about her marriage? These questions are actually answered in the song ‘Cinderella’s Revenge’ by Steampunk-influenced musical group The Tenth Stage.

Another example is American McGee’s Alice, a video game, where Lewis Carroll’s Alice in Wonderland is continued. In this version Alice has grown up to a young woman, who went insane, because her parents died. Again she escapes reality to Wonderland, which has, due to her state of mind, turned into “Horrorland”, where former friends became her foes.

Although the ‘fairypunk’d’ tale seems to be a completely new story, readers should still get the feeling that they are reading something they are familiar with. The original fairy-tale is only there in its essence, the rest is a mixture of historical facts and fiction. The first break with the conventions of a fairy-tale is to put it in a time context (a counter-factical or anachronistic one). The second is to put it in a geographical context. And the third is to have no happy ending, or an open ending, as if the fairy-tale would be continued.

The fictional parts depend completely on the imagination of the author and the reader and that is what makes the ‘punk’-element of FairyPunk. The tale is not for children any more, but made a new access for adults interested in history, engineering or just the literary interest to enjoy fairy-tales again.