Another year has passed, The Wave of Things has entered its second year of existence. Episodes require proper planning and time for recording and editing, therefore it is not always possible to keep up with my initial goal of at least one episode per week. However, 32 new episodes is still a good number.

I had some great talks with people in the scene like Keren Batok or Sean Bowley from the post-punk band Eden along with many others.

A new format was introduced to the show, called Wave News, with interesting facts from the dark alternative and new wave front. Due to the positive reactions I will definitely pursue and explore this idea further. Furthermore, the series of dark alternative country profiles, like the ones I did about Slovenia, Hungary, Romania and Lithuania in the last year, will see its continuation.

Let us now have the usual annual revision of the best dark alternative music that came out in the bygone year. Here is my personal Top 13.

Pilgrims of Yearning – The Visitor

One of the most promising newcomers in 2019 is the group with the awesome moniker Pilgrims of Yearning. Originally from Chile, they are now based in New England. The post-punk-revival has its heyday there, so the Pilgrims got there right on time to create smooth Siouxsie-esque post-punk. Recently, I’ve recently had a nice talk with them on the show.

Talk with Pilgrims of Yearning

Marta Raya from Poland is for sure one of the brighter stars on the contemporary darkwave skies. Ever since she split from the project Monowelt, she continues to create magnificent tunes on her own. 2019 saw the birth of the album ‘Reflection’, the follow-up to her remarkable debut ‘Hidden Emotions‘.

She Past Away – Disko Anksiyete

The Turkish duo She Past Away gained quite some reputation over the last ten or so years, and is very active as a live band. Studio releases are scarce, therefore it is always a good reason to celebrate when a new She Past Away album is put out. On their third record ‘Disko Anksiyete’ the duo from Bursa transforms disco sounds into their own unique style.

The first things you think about when imagining Italy are most likely summer, sun, an excellent cuisine and dolce vita. Apart from that the country is known to have one of the best dark alternative music scenes in Europe. One of the most prominent representatives of this scene is Ash Code from Naples. Their third studio release ‘Perspektive’ discovers new sounds and marks the highlight of their discography so far. In July 2019 my favourite track from this LP, ‘Disease’, has been eternalised by an awesome video.

Bestial Mouths is the project around mastermind Lynette Cerezo, based in Germany’s capital Berlin. Being around since 2009, Bestial Mouths hit a new high with their EP ‘Inshroudss’ which experiments with heavy industrial sounds. The song ‘Withiin’ will definitely remain in my personal playlist.

Nao is one of the most interesting fellows I have had the honour to talk with at The Wave of Things. The Japanese musician who spent a whole lot of time in New York and is now living in Germany, covers a wide range of dark alternative music, from synthpop over minimal wave to very dark darkwave, as showcased on his latest release ‘Stahlgrau’.

Soft Riot – Taking Off The Edge

Jack Duckworth, the eccentric musician better known as Soft Riot, has returned with his seventh release titled ‘When Push Comes To Shove’. It is in a typical Soft Riot-manner colourful, crazy and very artistic. Just have a look at the video below to see what I mean.

Greek duo Paradox Obscur‘s previous release ‘Artifact’ was a blast and so will be their upcoming album ‘Synthesis’. However, we will still have to wait until March 2020 to prove that hypothesis. To hasten the wait the duo has granted us a sneak preview with the single ‘Abeyance’.

Xarah Dion is a solo synth musician from Montreal, Canada. In 2019 she had released her third studio album ‘Plein Nord’. Eight industrial-influenced songs will put the listener under their spell. Especially the track ‘Ethos Eros’ is a captivating anthem.

Xeno & Oaklander are amongst the stars that have emerged during the minimal wave hype some years back. Their last year’s release ‘Hypnos’ proofs that their heyday is far from being over, in contrary, it turned out to be the duo’s most sophistcated album. In March 2019 the track ‘Insomnia’ got its own charming video.

Box and the Twins is a peculiar duo from Cologne, Germany who claim to make darkpop music with nice bass and guitar work. Their third studio album ‘Zerfall’ came out this year and earned quite some positive reviews. Among the 10 new tracks are some real hymns, like ‘The First Dream’ and ‘Dein Herz schlägt noch’ (“your heart is still beating”), both also backed by a video.

After being around on youtube with only some songs for quite some years, Australian post-punk duo Pleasure Symbols finally put out a first longplayer titled ‘Closer and Closer Apart’. As expected, it turned out to be a formidable album, partly reminiscent of early Xymox.

Next to She Past Away there are other great bands from Turkey, like masked post-punkers Dark Lake Whispers and the new (at least to me) Affet Robot (“forgive robot”), the dark synthpop project of Eren Günsan. The song ‘Fırtına’ immediately caught my attention, not least because of the beautiful Turkish language and the stylish video.

And here’s a selection of some of our own. To see my whole discography, please visit this page.

Last Halloween we released the video to ‘Vampyres Like Us’, a play with vampyre-clichées. In a similar manner is this year’s Halloween song ‘Moonbathing’ (think of the Addams Family!).

This was the best of 2019. Are you ready for the best of the past decade? Click below to find out more! 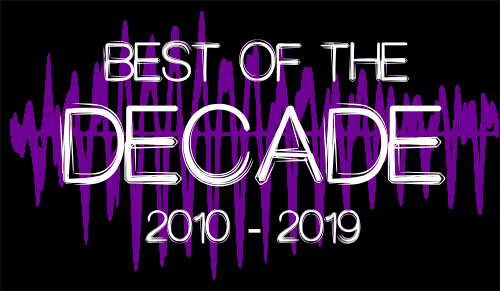