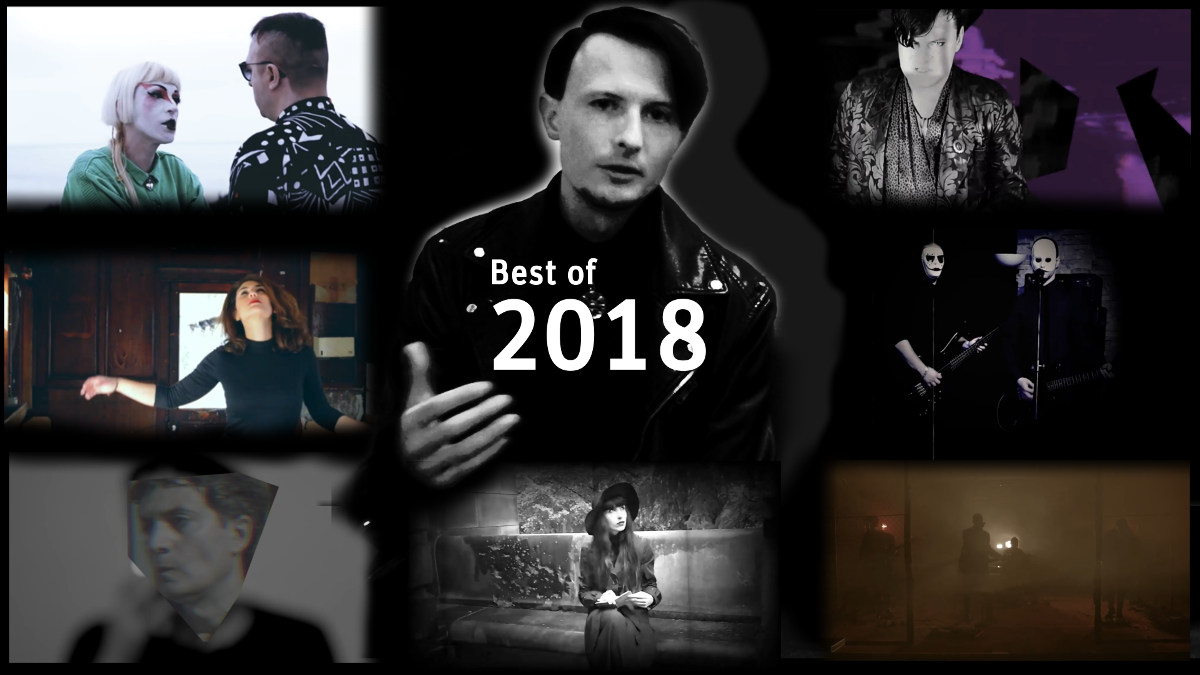 2018 was a year with a lot of changes in my life. The biggest was maybe the creation of The Wave of Things show, with one or two weekly episodes, focusing on dark alternative music (featuring talks with musicians, reviews and the like, but not only). The second big change were the foundations of my bands Deus Faust (with Raymond Nelson from Maine, we released our debut album What I Saw in autumn), and Tenebris Obortis (with No-Face), a doomy neofolk-influenced darkwave project. Thirdly, I was involved in several collaborations, e.g. with Toxic Razor’s Metal Disco, and with Turkish duo Dark Lake Whispers. Therefore, I neglected this blog but I have plans to redefine it in the near future to go along with the show.

The year 2018 was also a great year for dark alternative music, and as the years before I compiled my personal best of list for you. This year it is a top 21, as I made three episodes to seven songs each on The Wave of Things.

Soft Riot – The Eyes On The Walls

The Wave of Things started with a talk with Jack Duckworth, the eccentric mastermind behind the one-man-project Soft Riot. Soft Riot‘s music has a retro 80s sound, and his videos are amazingly artistic, as ‘The Eyes on the Wall’ showcases.

Suddenly appearing out of the mist, two mysterious men, hiding behind white masks… this is Dark Lake Whispers. They created a wonderful debut album named Karagöl. The duo from İzmir, Turkey, which is strongly influenced by their compatriots She Past Away, adds to the Turkish wave scene and is definitely one of the biggest discoveries of 2018.

European Ghost – Suspended in the Void

When I met European Ghost in Bologna two years ago, they had just released their dark debut Pale & Sick. In 2018 the trio returned with an even darker record titled Collection of Shadows. The first track ‘Suspended in the Void’ is exemplary of the hypnotic music of European Ghost.

This year the darkwave duo Monowelt released their second and final album Last Cup of Sorrow. But there is no reason to be sad, as both, Marta Raya and Daria Leere, continue to make good music. Marta Raya released her solo-debut Hidden Emotions in May which was then also released on vinyl. For the song ‘Those Severe Times’ Marta recorded a video clip.

Another great discovery of 2018 was Night Haze from Greece. Their dynamic single ‘Fizz Mother’ is simply mind-blowing! Later that year we also witnessed the birth of their debut Love is Chaos.

Two years ago I met Leonardo Canatella in Bologna for a chat. His band BeStrass had released an EP called The Seasons at that time. Since then the band had transformed crucially, the line-up changed, and while Seasons was sung in English, Leonardo sings now in Italian. Their video for ‘Bugia’ was created (guess guess!) by no one less than the great visual artist and musician Mario d’Anelli (The Black Veils, European Ghost).

Selofan – Give Me A Reason

The Greek duo Selofan is already an institution in the dark alternative scene. 2018 saw the release of their album Vitrioli with the hit ‘Give me a Reason’, definitely one of my favourites for the years to come.

The industrial duo Alles from Łódź, Poland, creates one of the most unique sounds in the whole dark alternative music scene. Their third album Hope is once again different from its predecessor Culture, more experimental, more challenging. Finally they also made a song titled ‘Wszystko’ which means “Alles” (“everything”) in Polish.

Although the darkwave duo Tearful Moon from Houston, Texas, exists only since 2015, they are already quite successful. In 2018 they released the stunning album Evocation, on which you cannot miss the dark anthem ‘Animal Inside’.

The other half of Monowelt, Daria Leere from Russia, also went her own way. This year saw the release of her debut Fragmented Identity. Daria’s solo-work is more crazy and experimental than that of her former colleague Marta, of which the song ‘Gleisdreieck’ is proof of.

Mayflower Madame – Before I Fall

The Norwegian post-punk/psych-noir band Mayflower Madame released their EP Premonition this year, the first release since their debut Observed in a Dream from 2016. Premonition is a “collection of apocalyptic love songs”, and the song ‘Before I Fall’ is reminiscent of Cigarettes After Sex.

The duo with the peculiar name Semiotics Department Of Heteronyms, SDH in short, from Barcelona released a small EP in March, and only three months later presented us with their self-titled debut album. The minimalist song ‘Tell Them’ is very captivating.

2018 was a good year for the solo-musician Adam Usi from Augsburg, Germany. First he surprised us with the album In Plastic Bloom and later made a great track with scene-grandes Paradox Obscur. Exemplary for Adam’s great voice is the song ‘Plastic Flowers’.

Ash Code from Napoli, Italy, are well known in the dark alternative scene. The trio released their awesome third studio album Perspektive this year. The title song is a collab with Luca Gilian from Die Selektion, and Claudia sings in her favourite language, German.

Foxxxy Mulder – Everything in Bloom

The duo with the peculiar name Foxxxy Mulder from Seattle appeared in 2018 with the album Heretic. With a male and a female vocalist their sound is darkwave with shoegaze influences. ‘Everything in Bloom’ is a dark anthem worth being added to your playlist.

The Glass Beads are a duo from Ukraine’s capital Kyiv. This year they released an EP with four songs. Their sound is minimalistic, with nice guitar and bass work. They also made their first video to the song ‘Phobia’.

In 2018 I had the chance to see Dear Deer twice live in Bratislava. Both shows were awesome and very powerful. The French duo released their second studio album Chew-Chew this year. Their sound is heavily influenced by American no wave and noise rock.

One of the highlights of 2018 was the release of Toxic Razor’s second Metal Disco album Vade Mecum. The Paradox Obscur main-man included several collaborations with Supernova 1006, Mind Teardown, Keren Batok, and myself. The Georgian musician Keren Batok created a video to the title track ‘Vade Mecum’.

Vandal Moon is a classic synthpop act from the US from the mastermind Blake Voss. They released their second album Wild Insane in 2018, containing the hit single ‘Computer Love’.

CryptoChroma is a very mysterious project from Belgium. Not much is known about them. Their sound is industrial/EBM influenced darkwave, and the song which I liked most so far is called ‘More’.

As every musician evolves with time, Kriistal Ann who has a classic music education, has left behind any genre limitations and welded her own characteristic sound with elements from minimal wave, jazz, classic music and (dark) ambient.
“Touched on the Raw” is definitely an album that stands out in its field that discovers and explores new boundaries and therefore can only be referred to as “avant-garde”.

And here’s a selection of some of my own. To see my whole discography, please visit this page.

We all like the myth of the vampires, right? With ‘Vampyres Like Us’ Raymond Nelson and me were playing with cliches of these undead creatures. The video was filmed in Maine, in Slovakia and in Italy.

It was a special honour to sing in Turkish for Dark Lake Whispers track ‘Yaralı Yürek’. I had a few Turkish courses back in the day but unfortunately I forgot a lot. At least it helped me to get the pronunciation right.

Tenebris Obortis – A Lifetime Ago

Tenebris Obortis is music best described as doomfolk. Heavily influenced by neofolk of the 90s, with a touch of darkwave. We released only two songs so far but several others are in our drawer, waiting to be put out.

I hope you all had a good start in 2019! May it be another great year for dark alternative music.

Thanks to Raymond Nelson for proofreading this article!